The gender spectrum in art

From the Weekly Volcano blog Spew 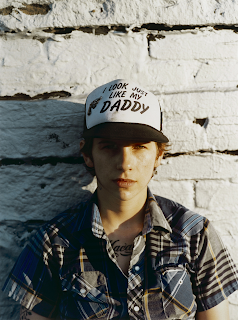 "HIDE/SEEK": Cass Bird, "I Look Just Like My Daddy," 2003 (printed 2010). C-41 print. Collection of the artist, New York. Photo courtesy of the Tacoma Art Museum
REASON NUMBER TWO WHY THIS SHOW IS AWESOME >>>
I could write about the HIDE/SEEK show at Tacoma Art Museum every week from now until June and not exhaust the topic. I won't do it but I could. Today I want to talk about two photographs in the show, Berenice Abbott's portrait of Janet Flanner and Cass Bird's I Look Just Like My Daddy, 2. (There's a reason for the number "2" tagged onto the end of the title; this is part of a large series by that title.)
These two portraits, one from 1927 and one from 2003, are indicative of huge shifts in the way sexual orientation and gender identity were viewed in the early 20th century and how they are viewed now in the early 21st century; and that is, in essence, the theme of the exhibition HIDE/SEEK: Difference and Desire in American Portraiture.
Prior to the 20th century homosexuality was hardly talked about and gender identity was an unknown concept. If heterosexual males had sex with homosexual males (they weren't called gay) the hetero partner was not particularly frowned upon, but the "gay" partner was reviled and ridiculed. This attitude, which may seem bizarre today, is illustrated in many of the paintings in the exhibition.
There was a shift in attitude in the early 20th century, and GLBT folks were forced into the closet where they had to use code phrases and images to safely out themselves to the select few. They wore masks in public. The great photographer Berenice Abbott showed this in a very stylish manner in her portrait of Janet Flanner. She is wearing not one but two masks, and not on her face but on her top hat. Her unmasked face becomes a third mask, the one she habitually wears in public. And her entire outfit is a kind of mask, men's clothing and a man's short haircut. Flanner is of ambiguous gender in this photograph. She was openly bisexual.
Abbott had been an apprentice to the great Dadaist Man Ray in his Paris studio and along with Ray and Duchamp and other Parisian bohemians of the day would have known many people who enjoyed pretending to be someone other than who they were, including gender bending (Duchamp had a female-persona alter ego named Rose Salévay). 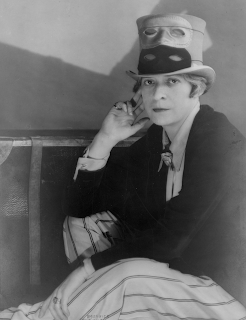 Cass Bird is a contemporary photographer who documents alternative lifestyles and mores. She's known for portraits of people who manipulate gender roles. The Brooklyn Museum described her photographs as portraying "the beauty and the positive existence of these individuals, their male or female origins overridden by their own will to define their gender, sexuality, and place in society."
Bird's photograph in this exhibition depicts a young person of ambiguous gender, short hair, full lips and just a hint of what may be female breasts under a checkered shirt, the photo cropped so the viewer can't tell for sure. Some of the subjects in the series are clearly transgender or of no obvious gender, while others are unmistakably male or female; i.e., cisgendered. They are all equally and unabashedly what they are.
Bird's photographs illustrate that many young people today defiantly obscure accepted gender roles and identity. Quite a change from the days of Janet Flanner.
These two photographs provide a glimpse into the complexity of themes and ideas explored in this large exhibition. The show runs through June 10 at Tacoma Art Museum.