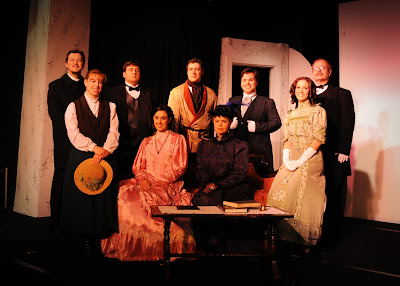 Published in The News Tribune, May 7, 2010
Photo COURTESY OF PARADISE THEATRE
The cast of “The Importance of Being Earnest” dress the part for this period piece.

I’ve seen Oscar Wilde’s “The Importance of Being Earnest” several times, and the performance at Paradise Theatre is as good as any. It’s thoroughly delightful. Beginning with the first droll dialogue between the conniving Jack Worthing (Nathaniel Jones) and arrogant, self-indulgent Oscar Wilde avatar Algernon Moncrieff (Luke Sayler) I was captivated. And then the lovely Gwendolen Fairfax (Shannon Burch) made her first appearance with a smile like fireworks, and I was utterly charmed.

I might add at this point that I am not easily enraptured by period pieces. Hoity-toity people and upper crust British accents tend to be off-putting. In this instance, the actors seem perfectly natural and comfortable in the skins of their characters – the only exceptions being Donna Long as Lady Bracknell and Duane Petersen as Jack’s butler, Merrimen, both of whom seemed to strain to convey the called-for touch of pomposity.

The sets and lighting by Jeff Richards, costumes by Vicki Richards and direction by Mike Wilkinson are outstanding.

The set consists of appropriate period furniture in front of simple flats backed by a black curtain. The flats are stark white with subtle designs that from my seat in the front row seemed to be curlicues or flowers. Two of them had sensuously curved edges.

Strangely, they evoked images of Stonehenge, but they proved practical if not downright ingenious in quickly changing the set to a garden and a drawing room in acts two and three.

Vicki Richard’s costumes were lush and rich-looking. The women’s dresses are beautiful, and some of Jack’s outfits are outlandishly silly looking. If he is supposed to be a fop with bad taste, his clothes certainly fit the bill.

One of the world’s best comic writers, Wilde fills this play with witty dialogue and improbable situations. No woman would fall in love with a man solely because his name is Earnest, yet not one but two women do so in this play.

And it is highly unlikely that a young woman would create and believe in a fantasy engagement to a man she has only heard about, yet here it happens, and Wilde’s wit makes the audience want to believe such improbabilities.

The principal female characters, Gwendolen and Cecily Cardew are among the most lovable women characters in all literature – though they are certainly also quite silly. Burch as Gwendolen and Julia Sinnott as Cecily bring awesome talent to bear in playing these women.

When they mistakenly think of one another as rivals, their thinly veiled animosity is like static electricity hidden by a scrim of proper gentility. Both are wonderfully expressive, as are Jones and Sayler as Jack and Algernon. Jones paints Jack with a broad brush (his fake grief in mourning clothes more like a ridiculously exaggerated pout, but otherwise spot-on depiction of an absurd character), while Sayler almost underplays the droll Algernon. These four major characters are wonderfully cast.

Two other actors who shine in smaller parts are Kristen Hulscher as Miss Prism and Peter Knickerbocker as Lane. Rounding out the cast are Long, who does a commendable job as the snotty Lady Bracknell, despite flubbing a few lines, and Jon Elston, who is believable but not very engaging as Reverend Chasuble.

This is the last weekend to see “The Importance of Being Earnest.” For intelligent, lighthearted family entertainment it’s hard to beat.

Have you ever seen "Earnest In Love"? I knew that show forward and backward before I ever saw "The Importance of Being Earnest." It seemed weird without music! (I mean, how can you NOT like a show with a song called "A handbag is not a proper mother"?)

Haven't had that pleasure, Bev.

If you ever get the chance, don't pass it up. It's great.

There are lots of videos on YouTube, but unfortunately they all seem to be from a Japanese production! Still, they'd give you an idea of the music, even if you can't understand the words.