The sun comes out for ‘Annie' 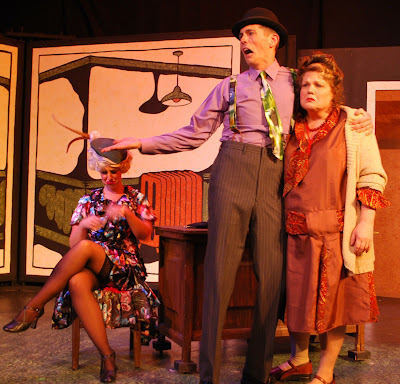 
Twelve-year-old McKenna Orme lights up the stage as the sweeter-than-honey orphan Annie.

This is Orme’s first appearance on the Capital Playhouse stage – or any other stage other than a recent school production of “Annie” – but far from her first outing as a dancer.

She has taken dance since she was 2, and has performed in numerous ballets with Dance Ensemble Northwest.

It’s not surprising she is comfortable dancing, but she seems equally at ease singing, with a big voice that made me imagine what Ethel Merman might have sounded like when she was 12.

Based on the comic strip “Little Orphan Annie,” the musical tells the story of an orphan girl during the Great Depression who is invited to spend the Christmas holiday in the home of the richest man in the world, Daddy Warbucks (played by Jeff Kingsbury).

Warbucks doesn’t have a clue about the real world, but he does have a huge heart. Not so Annie’s nemesis, Mrs. Hannigan (Jennie May Donnell), the orphanage matron who is as mean and selfish as Annie is sweet and Warbucks is rich. There are no subtleties in the play.

Kingsbury actually downplays Warbucks, which works quite well. He comes across sincere and as a natural father to Annie, even though Warbucks knows nothing about fathering. Kingsbury’s singing in this role also is toned down – it contains none of the bombast one might expect in a role such as this.

By downplaying the larger-than-life Daddy Warbucks, Kingsbury provides a contrast that lets the truly larger-than-life characters shine – Donnell as Mrs. Hannigan and Patrick Wigren as the sleazy con man, Rooster.

I can’t praise Donnell and Wigren enough. If the play were nothing but a few snippets of their scenes, I would pay to see it.

Because of her many previous outstanding appearances at Capital Playhouse, we’ve come to expect nothing but the best from Donnell. She is a professional actor who studied in New York and has appeared on stage in New York and London, and in the national touring company of Stephen Sondheim’s “Sunday in the Park with George.” South Sound theatergoers will remember her as Mrs. Lovett in “Sweeney Todd” and Desiree Armfeldt in “A Little Night Music.” And now as Mrs. Hannigan, she epitomizes evil.

She twitches all over, from a jerky walk to an eye that keeps blinking. She is wonderfully bad to her core.

Wigren has appeared recently in the ensemble casts of both “Joseph and the Amazing Dreamcoat” and “Rent,” and in larger roles in other area theaters, but this might well be his breakout role.

He steps out of an ensemble part to electrify the audience as Rooster – and when I say steps out, I mean it literally. Tall and skinny, he takes a huge step onto the stage, plops his foot on Mrs. Hannigan’s desk and crows. Wigren’s movements and facial expressions are hilarious, and his singing is powerful. His song and dance on “Easy Street” with Mrs. Hannigan and Lily (Jennifer Seifter) is the rocking comical high point of the play.

As usual, set designer Bruce Haasl and lighting designer Matt Lawrence have done superb jobs. When the set is taken down, Haasl’s backdrop paintings should be shown in a museum or art gallery. ‘Annie’