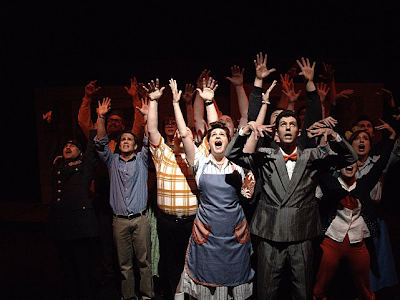 Theatre Artists Olympia continues its tradition of outlandish spring musicals (remember “Vampire Lesbians from Sodom” and “Cannibal the Musical”?) with “The Brain from Planet X.” Written by Bruce Kimmel and David Wechter, directed and musically directed by Josh Anderson, “Brain” is a spoof of cheesy 1950s sci-fi thrillers. If it wasn’t written by Kimmel and Wechter and produced by TAO, you might think it was written and directed by Mel Brooks and performed by the cast of “Saturday Night Live.”
This may not be everybody’s bottle of beer, but if you like this sort of thing in general, this one is fabulous, from the cheap sets (the whole of which cost $46.35, or was it $43.35? I can’t remember, but if you donate that much you can become a TAO set sponsor) to the creepy music with Anderson on piano, Christina Collins on the Theremin, Nick Van Kirk on bass and Heather Matthews on drums.

Flores is ideal as the leader of the alien invaders with a mincing walk and big pink brain on his head.

Russ Holm, who has built a reputation for himself playing outlandish characters, most often at Harlequin Productions, is indescribably funny as the mad scientist Professor Leder. His voice keeps trailing off into an amazing kind of wheeze that is breathtaking, and his timing is impeccable.

Paul Purvine sings and dances maniacally as the alien Zubrick.

Paul Parker plays General Mills as a kind of cross between Napoleon and George C. Scott as General Patton. The play on his lack of stature offset by his tall and sexy aide, Louise Morgan as Private Partz is a running joke that could have been used more. When they first appear on stage he stands on a box to make himself taller than her, and when they walk together she squats. After the first time she drops the squat; I think she should have kept it up.

Musical highlights include Joyce and Fred singing “Here on Earth,” in which they rhapsodize about how wonderful life is in the suburbs and the big tap dance number “The Brain Tap” with Zubrick, Yoni and the ensemble.

Another scene that deserves special attention is the beach scene with two muscle man in well stuffed gold lame shorts. They are Rob Taylor, who doubles as the narrator, and Tyler Quinn Stewart, who has never before been on stage (hard to believe). I hope we will see him in other productions.

“The Brain from Planet X” is scheduled for a final performance on Saturday, May 15, but it is rumored that it might be extended beyond that.