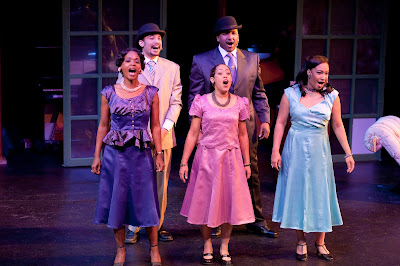 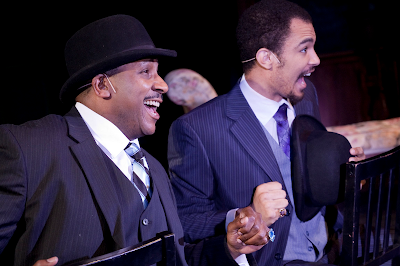 Simply sublime: Centerstage hits show out of the park


A signature song in “Ain’t Misbehavin’” is “The Joint is Jumpin’. ” Nothing better describes what’s going on at Centerstage’s Knutzen Family Theatre during the run of this wonderful tribute to Fats Waller.

This production has everything you could possibly want in a musical – everything, that is, except for a storyline. It’s not a play; it’s a musical revue. There is no plot, but it does create a vivid picture of life in Harlem’s clubs and theaters during the Harlem Renaissance.

In the 1920s and ’30s, highbrows and lowbrows, black and white, came together to swill booze and dance to the music of stride piano players and big bands that were just beginning to develop the music later to be known as swing. It was a highly charged era. African Americans were steeped in blues, jazz and gospel – all expressed with supercharged music that was rowdy, raunchy, humorous and often heart-breaking.

This is the third time I’ve reviewed this show, and I’ve loved it every time. This time, I sat in the front row in a theater where the stage is not raised, meaning the singers and dancers were five feet away from me. On the hilarious “Your Feets Too Big,” Bill Bland picked me out and sang right to me, no more than three feet from my face. Nothing compares to that kind of intimate entertainment.

The ensemble cast for this production is marvelous. Most of them are well known for their many performances on South Sound stages.

Stacie Calkins recently was seen in “Rent” at Tacoma Musical Theatre and was a knockout as Effie White in “Dreamgirls” at Tacoma Little Theatre and as Sarah in “Ragtime” at TMP. Ashanti Cole has performed at Intiman, Village Theatre and the 5th Avenue Theatre, and was in “The Colored Museum” at TLT.

LaVon Hardison is renowned for her roles in the “Stardust” series and summer rock shows at Olympia’s Harlequin Productions, as well as for her dramatic performance in “Intimate Apparel” at Harlequin. Jesse Smith recently was seen in “Rent” at TMP.

Only the fifth cast member, Bland, is not a veteran of South Sound stages, but he definitely is a veteran actor. He comes from Pittsburgh, where he recently performed as Othello for Untamed Shakespeare, and he has performed in five national and international road shows including “Ain’t Misbehavin’.”

Bland has a wonderfully mischievous smile and a powerful baritone voice. No matter where he is on the stage, you feel like he’s singing just to you. All three of the women are terrific singers, and they also dance and strut with great verve. Calkins’ voice shakes the rafters, and Hardison easily slips in and out of styles from bluesy and sultry to scat singing. Cole also has great range and throws herself into the dance moves. Smith is a fresh young face, almost too young for the part, but he brings great energy and style. On the “The Viper Drag,” also known as the reefer song, he personifies evil, yet with an underlying sweetness.

Of course, the songs are legendary, and include showstoppers such as the title song and “Loungin’ at the Waldorf” (featuring Bland and the ensemble), Smith’s rendition of the aforementioned reefer song, and the hilarious “The Ladies Who Sing With the Band” in which the women take turns soloing as bad singers and prove it takes a really great singer to sing badly well. And then there is the totally different “Black and Blue,” an operatic, highly stylized blues dirge. It is breathtaking.

Not only is the music great, but the whole production is beautifully staged with effective set and lighting by Craig Wollam, and direction by David Duvall, who also plays a mean piano, with backup from Larry Leggett on bass and Troy Lund on drums.

I cannot recommend this show enough. Get there early and grab a seat down front. ‘Ain’t Misbehavin’ ’

Tickets: $10 to $25 depending on age; group discounts available