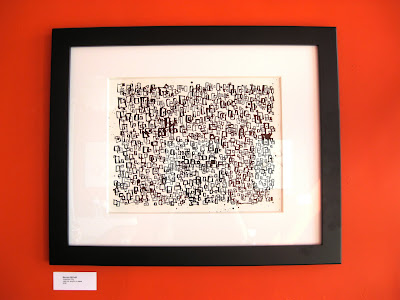 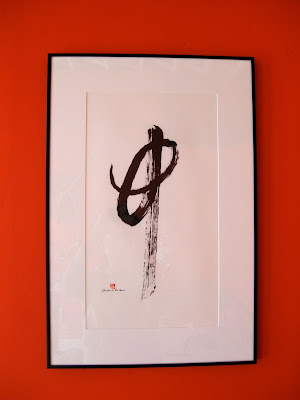 
The show is called Flow, and the drawings by Andrea Erickson and Maureen McHugh at mineral do present a nice flow of contrasting and blending styles. Their art is billed as calligraphic, which is highly descriptive of Erickson's sumi paintings, but McHugh's abstractions in ink are not so much calligraphic as they are evocations of Mark Toby's "white paintings" - only the marks are not white, they are black.

Classically trained as a sumi painter, Erickson is showing a group of ink drawings on rice paper, many of which look like brush-drawn Asian letters. They combine the elegance and simplicity of traditional Asian brushwork with the stark power of a Franz Kline abstraction. In her more traditional and calligraphic pieces it looks like she has loaded her brush with ink and drawn the character with a single, smoothly flowing line that goes from fully loaded (wet and black) to dry and empty. Looking at these works you can almost feel the act of painting and picture it as it might be seen in an animated film.

The one piece that does not fit is a black and white painting with ink and - strange as it may seem - milk, which shows a group of figures in various tones of gray, black and white floating over a field of loosely brushed gray marks. The floating figures look like writing but also like human or animal figures. This painting is interesting but lacks the impact and clarity of her other works.

McHugh, co-owner of Mad Hat Tea Company, is showing a group of ink drawings that employ the trope of grouping and overlapping freely drawn geometric forms such as squares, triangles and circles to form overall fields or to create other geometric forms. She cleverly uses this device of grouping forms in a pattern to create other forms in a group of three small drawings called "Ceci Nest Pas Un ..." (triangle, square or circle). The title is based on the famous painting by René Magritte, "Ceci N'est Pas Une Pipe." In one, a group of triangles creates a larger triangle, next a group of squares, and then circles.

In a radical departure but with a similarity of drawing style, McHugh is also showing a comical drawing of an octopus with a page full of words underneath. It's a list of things found (possibly underwater?) including such weird objects as K-Y Jelly, seven plastic green army men, brass knuckles and a broken drummer boy. The list ends with an adjective, indicating it was arbitrarily cut off.

Also showing at mineral, as usual, is jewelry by owner Lisa Kinoshita.
Flow