A subtle approach to tragedy in 'Rabbit Hole' 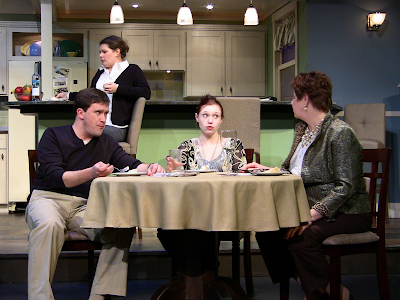 Life and death: Outstanding writing, acting and directing sets the tone for production

Published in The Olympian and The News Tribune, March 26, 2010
Pictured: Jason Haws as Howie, Megan Kappler as Becca, Melanie Moser as Izzie and Kathy Dorgan as Nat
Photo by TORSTUDIOS.COM

Imagine invisibility. You sit for months unseen in a corner chair in Howie and Becca Corbett’s living room watching the family wrestle with the unspeakable grief brought about by the loss of a young child.

Four-year-old Danny Corbett has been accidentally killed, and if they’re not careful, their conflicting manners of coming to terms with grief (or avoiding it) may destroy the family.

If this story were a made-for-television movie, or if it were produced by a less-skilled cast and crew, it would be a gut-wrenching drama, but as performed by Harlequin Productions under the able direction of Brian Tyrrell, it is a strangely quiet production. Thus the feeling you are sitting in that chair watching the family.

“Rabbit Hole” won the Pulitzer Prize in 2007. It was written by David Lindsay-Abaire (“Fuddy Meers” and “Kimberly Akimbo”). Harlequin’s production stars Megan Kappler as Becca and Jason Haws as her husband, Howie; Melanie Moser as Becca’s sister Izzy; Kathy Dorgan as their mother and Peter Beard as Jason, the high school student who accidentally ran down their son.

The set by Jill Carter is the palpably real interior of the Corbett’s living and dining rooms, a kitchen with a fully stocked refrigerator, and Danny’s upstairs bedroom. The details are impeccable, from their snack foods and laundry to the light in Danny’s room and the light cast on Howie’s face from the television only he watches.

In the Broadway production, a revolving set was used. I can’t say for sure because I didn’t see it, but I suspect I would have found that too theatrical. I like that there were no set changes and no dramatic lighting or music at Harlequin.

The only thing remotely theatrical about this production was a little music and dimming of lights for scene changes (lighting by Paul Purvine as nuanced as the acting).

Despite intense arguments between each of the characters and emotional breakdowns by both Howie and Becca, I found myself strangely emotionally detached from the action, perhaps because Lindsay-Abaire’s brilliant dialogue and the cast’s nuanced acting avoided all of the usual tricks of tapping into emotion and simply presented real people in a real situation.

For example, in the opening scene I thought Becca’s words and expressions were out of sync with one another. Her words expressed shock and anger as she calmly folded laundry while bantering with Izzy.

For a few moments, I wondered why she kept folding that damn laundry, and why her actions didn’t fit her words. Gradually, it dawned on me that she had shut off all emotion, and that the clothes she was folding belonged to her dead son.

That is outstanding writing, directing and acting, and it set the tone for the entire play.

While Kappler portrayed Becca’s tightly wrapped grief, Haws portrayed Howie’s grief much differently – abruptly and usually inappropriately shouting at Becca or Izzy and then immediately reining in his anger.

Haws typically shines in outsized roles such as John Merrick in “The Elephant Man” or the outlandishly humorous Bottom in “A Midsummer Night’s Dream.” In this role, he proves that he can play an everyman with controlled intensity.

Dorgan is a natural as the meddling mother who, like her daughter, tries unsuccessfully to keep a lid on her emotions.

Beard is the quietest and most controlled of all the cast. He barely speaks, appears shy and painfully polite, and is obviously bottling up his pain.

The most animated and most likable of all is Moser as the outlandish sister who also bottles up her pain but under a faade of humor and bravado.

This play is definitely not for children. It is anything but light entertainment. There is no hopeful, movie-of-the-week resolution, nothing to mitigate the pain. You might not go away in awe of the dramatic effect, but you will go away feeling like you’ve shared life and death.

Anonymous said...
This comment has been removed by a blog administrator.
April 01, 2010