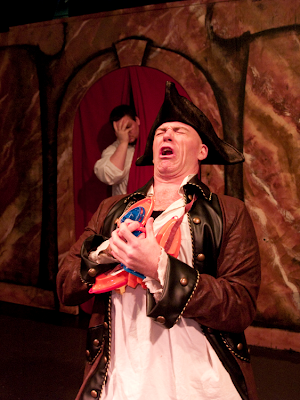 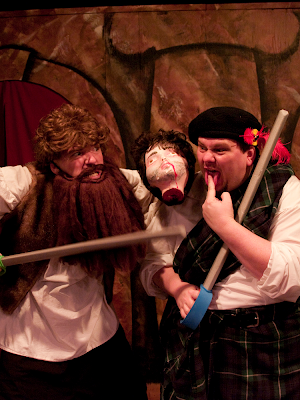 Olympia Little Theatre is campaigning to raise the roof, literally. At the preview performance of “The Complete Works of William Shakespeare (Abridged)” they raised it figuratively.

In my career as a theater critic, I can hardly remember laughing so much or hearing so much laughter. It was a small audience, but they pumped up the volume during this comedic romp, ending with a standing ovation.

“The Complete Works” was written by Adam Long, Daniel Singer and Jess Winfield, and made famous by their touring company, The Reduced Shakespeare Company, which has produced countless versions of this and other mutilated Shakespeare works for screen, stage and television. The OLT production is directed by Erich Brown and stars Aaron Earle Hobbes, Chris Cantrell and Thomas Neely as 75 characters in 37 plays plus a sprinkling of sonnets. It’s a madcap high-energy performance filled with physical comedy and outlandish misinterpretations of Shakespeare’s words. And there is a lot of audience participation. As Cantrell, who narrates and plays many parts, warns, “Audience participation is not optional.”

The three actors play all of the parts from plays ranging from “Romeo and Juliet” to “Hamlet” with, in between, all of Shakespeare’s comedies rolled together into a single play.

It is almost impossible to single out any of the three actors because they switch roles so quickly and so often that it’s hard to remember who played which character. Neely plays Romeo to Hobbes’ Juliet, but they quickly change to become Tybalt, Mercutio, the priest and apothecary and others; tumbling, fighting, falling dead with athleticism and lightning-fast costume changes. Hobbes plays most of the female parts and Cantrell is the narrator, although at times Neely or Hobbes steps in to explain the action (with Hobbes in particular getting it terribly, terribly wrong).

Simply remembering their lines and knowing what parts they are playing from one moment to the next must be a daunting challenge. I didn’t notice any flubbed lines or improvisation. But if there were any, who could tell? It just becomes part of the chaos.

“Romeo and Juliet” plays like a Marx Brothers comedy, “Titus Andronicus” is done as a television cooking show with blood and gore worthy of a Monty Python skit, “Othello” is a rap, all of the histories are combined and presented as a football game, all of the comedies are wrapped into one because the actors say they’re all the same anyway. (There is no reverence for Shakespeare here. They say he is a formula writer, yet laud “Hamlet” as the greatest play ever written in the English language.)

Thirty-six plays are done in the first act. “Hamlet” takes up the entire second act, much of which is an overly long psychological analysis of Ophelia, which is done with the help of willing audience members. At the end, everybody dies. Then the dead get up, and they replay the whole thing in a super condensed version. And then again even faster. And then they do it backward.

It is not necessary to be familiar with Shakespeare’s plays to enjoy this show, but it helps. Many of the verbal barbs are funnier if you know the plays, but for people who enjoy slapstick, the physical comedy is hilarious with or without familiarity with the source materials. Much of it could be too intense for young people. Bringing pre-schoolers is not a good idea.

The show is billed as 37 plays in less than two hours, but according to my watch the preview performance ran almost two and a half.