Relive rockin' '80s with TMP's production of "The Wedding Singer" 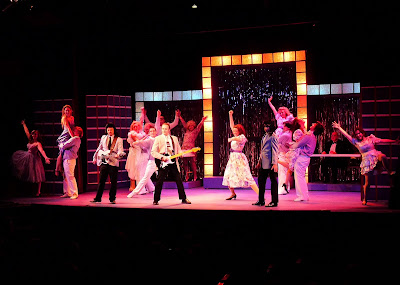 The old trend of basing movies on Broadway musicals has been revived in recent years to produce a slew of musicals based on hit movies. Some of those are commercially successful but critically mediocre for a couple of reasons.

For starters, the stage versions, especially in community theaters, lack star power. Audiences inevitably compare the play with the movie, and often local actors can’t compare with Hollywood stars. Also, if the translation from film to stage is not theatrical, it becomes a warmed-over version of the movie.

Tacoma Musical Playhouse’s production of “The Wedding Singer” is a delightful exception. With beautiful sets and costumes, rousing music and choreography, it translates well from film to stage. Plus they have the multitalented Matt Posner in the role of Robbie the singer.

Posner is at home on the musical theater stage. He sings and dances in a style reminiscent of old-time Broadway stars, and he has the acting skills to bring characters to life. By way of comparison, Adam Sandler, who starred in the movie version, is a competent comic actor, but not a Broadway-style trooper. Give me Posner in that role any day.

“The Wedding Singer” is a spoof on 1980s music and fashion. Not just the music, but the dialogue is peppered with lines from popular songs of the era. Colorful costumes by Joan Schlegel parody the worst styles of the time, as do the ridiculous hairstyles – mullets on the guys and big teased hair on the gals (plus a wonderful head full of beaded braids on Grant Troyer, who plays a campy cross-dressing musician who looks like a blend of Michael Jackson and Boy George).

“The Wedding Singer” is a star vehicle. The main character, Robbie, appears in just about every scene and sings and dances on almost every musical number – sometimes solo, sometimes in duet with Julia (Elise Campello), and sometimes blending into the ensemble. Posner’s singing stretches from tender ballads to rousing rock numbers. When needed, his voice is a whisper, and on hard-rocking numbers such as “Somebody Kill Me” belts it out like a punk rocker. When singing with others, he doesn’t try to upstage them and tones it down to let his co-stars shine. He convincingly plays angry, hurt, romantic, silly and sloppily drunk.

Campello has the wholesome good looks and the beautiful voice to successfully play the major love interest. Her voice is clear and softly modulated and stands out among dozens of other voices. Her character and Robbie are the only ones in the play who don’t sport outlandish hair and dress (although Robbie’s pink dinner jacket and yellow letterman jacket come close). They are the boy and girl next door in a world full of silly flamboyance.

Among the many supporting actors, Troyer stands out. Five years ago, I singled him out as an outstanding child actor in “The Secret Garden” at Encore! Theatre. He was 12. The next year, I again honored him, that time for his role in “No Strings Attached,” another Encore! show. Now at 17, he has matured into adult roles and is proving that his early promise was no fluke. His portrayal of George is outstanding. You have to see him rap with Granny Rosie (Marilee Johnson) on “Move That Thang.”

“The Wedding Singer” is a light-hearted, silly and exuberant musical comedy translated from film into a highly theatrical entertainment.