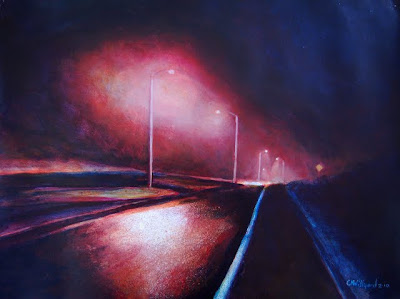 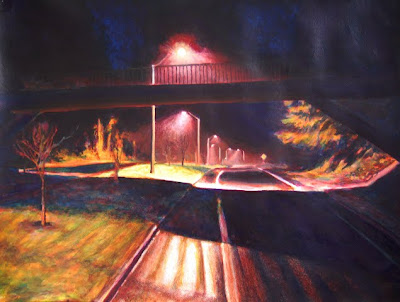 Charles Willyard’s paintings of roads at night now showing at Caffé Vita in Olympia look a lot like calendar art or postcard art, or maybe like story illustrations out of a 1950s Saturday Evening Post. Willyard’s painting technique and his sense of design, color and most notably his dramatic light-and-dark contrast are all admirable. He is a skilled painter. But the style and subject matter of these paintings is outdated, melodramatic and sentimental. It is easy to be impressed with these paintings but just as easy to be put off.

When I stepped into this popular Olympia caffeine emporium my eyes went immediately to the wall upon which were a series of what looked to be photographs of dramatically lighted night scenes. They had a surface sheen that from across the room looked so much like high-contrast photographs that I was surprised to see — once I got close enough — that they were paintings. But even upon close examination I couldn’t tell what kind of paintings they were. I thought they were pastels, perhaps because I had recently seen a similar surface sheen in pastels by Bill McEnroe. Willyard says they are acrylic on paper.

In a written statement, the artist said they were inspired by driving home on icy, foggy roads in December of last year. He spoke of the light as being eerie and unnatural.

“When I see those orange sodium street lamps, reflecting off the darkened road, a strange feeling comes over me.” Willyard wrote. “A kind of... sadness? ...longing? Is it that I'm remembering all the road trips I've taken in my life, the loneliness of being far away, headed somewhere, but, in between? Or is it even older than that? Maybe the road awakens an ancient, ‘hard-wired’ instinct to wander and explore? The sense of familiarity, then, may be much deeper.”

The feelings he expresses so poetically in words are equally evoked in the paintings. The dark, foggy and empty roads are rendered in deep tones of blue, black, orange and violet. In his statement Willyard speaks of darkness and mystery, but he does not mention emptiness. And it is the emptiness of the roads that gives these images a haunting quality. There are no cars on the roads, except, possibly in one of the paintings where we see lights that may or may not be headlights far down the road. Maybe it’s four o’clock in the morning and a solitary early riser has just hit the road.

One painting shows an overpass that casts a strong diagonal shadow across the road with banded rows of light filtered between rails on the overpass. The trees and grass are a biting acid yellow. Compositionally this is the strongest piece in the show. It reminds me of some Edward Hopper paintings. Among the rest, the simpler the better. The fewer things are seen, the stronger the emotional impact, which means the strongest of all is a painting in which all of the trees or whatever else may be lurking in the dark are shrouded in fog. The white line down the center of the road is bright blue under the lights and off to the side is a parallel blue band that can be interpreted either as a sidewalk or a drainage ditch with water, or maybe ice.
[Caffé Vita, through March 30, 124 4th Ave. East, Olympia, 360.754.8187]
March 12th - April 19th
Posted by Alec Clayton at 7:58 AM

Wow, those paintings take me somewhere special. I am a native of Los Angeles, now living in the Pacific Northwest. I love the feeling they give me, I remember long drives home at 3am that made me feel the same way. I stumbled upon your blog from visiting Snowbrush - I am glad I found it! I am going to become a follower, I want to see more! Thanks for a great blog. Love, "Mrs. Slug"