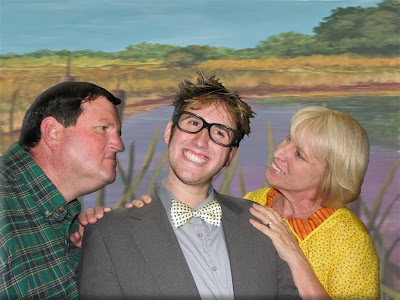 Published in The News Tribune, Aug. 28, 2009
Pictured:Timothy B. Lott as Drake, Mauro Bozzo as Ugly and Diane Lee Bozzo as Ida


In its second season the ManeStage Theatre Company in Sumner seems to have matured a bit. That’s not to say that its current show, “Honk,” is for mature audiences, but rather that the professionalism of this decidedly amateur theater company has been kicked up a notch since I saw last year’s “Bye Bye Birdie.”

“Honk” is a musical based on Hans Christian Andersen’s “The Ugly Duckling,” with music by George Stiles and book and lyrics by Anthony Drewe. It is co-directed by husband and wife Brenda S. and Jay Henson.

It’s a silly, fluffy, Disneyesque telling of the story of the ugly duckling who is rejected by his brothers and sisters and just about every other farm animal in the world – except for his devoted mother. I don’t think I’ll be giving away any earth-shattering surprises if I divulge that he turns into a beautiful swan in the end.

It is a children’s tale that adults can also enjoy because of its adult humor – adult in the sense of being sophisticated, not risqué, although there is one spicy scene between Cat (Brian Redpath), a feral tomcat, and Queenie (Christine Riippi), a house cat.

Diane Lee Bozzo and her son Mauro Bozzo are outstanding as mother and son Ida and Ugly. She comes across as sincerely loving and as fretful as any mother with a troubled child can be, and she sings beautifully. He also is a fine singer (being able to hold a note for incredibly long times without wavering seems to be a family trait), and his acting is outstanding. Long-limbed with wobbly legs, he exemplifies the movements of a gangly chick with movements reminiscent of Ray Bolger as the Scarecrow in “The Wizard of Oz.” And it is awe inspiring when he lets out with the eardrum-shattering “honk.”

Also excellent are Marion L. Read, as Maureen, who has a strong voice and commanding presence, and Scott C. Eagan as Greylag, with his outlandish parody of the incompetent leader of a troop of military geese. Credit Riippi and Daisy Nau as, respectively, Queenie and a chicken named Lowbutt, for their highly charged comic relationship.

In his brief turn on stage, Kent Wilson is fabulous as a jive talking and jazz singing Bullfrog, and Brandon J. Mitchell as Snowy provides two of the most hilarious moments in the play – a shocking gesture and a takeoff on a popular song, neither of which I shall explain because I don’t want to spoil the surprise.

Some of the other actors are inconsistent. Redpath is mostly funny as the nasty villain Cat, but tends to overact in places and is too loud overall (possibly a problem with his microphone on opening night). Timothy B. Lott’s performance as Drake, the father duck, is funny in spots but inconsistent. And Lindsay Delmarter sings well as top bird Grace, but her part of the story is superfluous.

The kids in the ensemble are particularly outstanding dancers, and the choreography by Brenda Henson is very good, especially on the big production numbers in which the entire cast is on stage. The tap dancing and the chorus line-style dancing – sometimes traditional and sometimes reminiscent of a Monty Python takeoff – are much better than the ballet numbers.

Not costuming the animal characters as animals was a brilliant decision. Rather than trying to make human actors look like animals, they tried, successfully in most instances, to capture an essence of the animals through costume, voice and gesture. Ida wears a simple yellow dress but does not in any way attempt to emulate a duck. Instead, she emulates a mother. Cat is not dressed as a cat but as a gangster, which reflects the nature of this character. Michael J. Bowen as Turkey wears an ill-fitting and out-of-style suit and a terrible greasy hair style to personify a “turkey” as slang for a loser. And the geese, who fly in military formation, are played as British flying aces (who crash a lot). Costuming in this manner must have been written into the script, because actors are pictured in similar costumes on Stiles and Drewe’s official Web site.

Not all of the costumes are that inventive, however. The father duck, Drake wears overalls and personifies a farmer more than a drake, and Maureen is supposed to be a bird of some sort but just looks like a woman in a house dress.

The set by David Josephson is a beautiful set of risers disguised as a rock garden with an atmospheric painted backdrop. It is most effective when used in combination with a scrim. The only major set change is for an interior scene with Queenie and Lowbutt in a room in which all the furniture is huge in relation to their small size relative to human scale. This is well done, but the brick backdrop in this scene is boring, not to mention it looks like an outside wall inside.

“Honk” provides an evening of terrific music and lots of laughs.