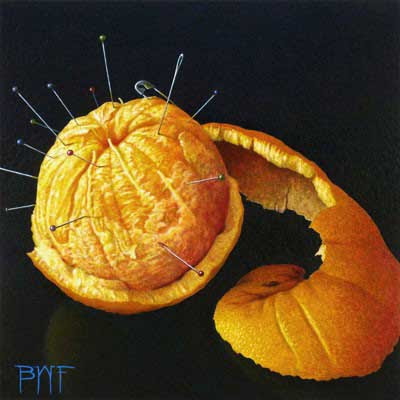 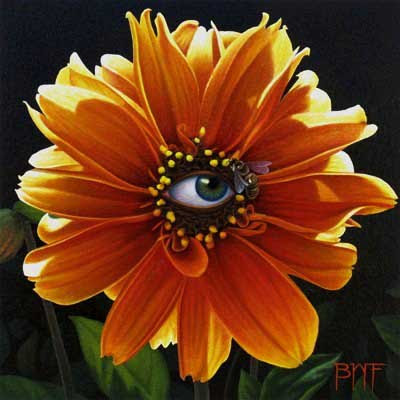 Surrealism and abstraction at Childhood’s End


Published in the Weekly Volcano, Aug 27, 2009
Pictured: "Optical Bloom" and "Pincushion" oil on board by Blake Flynn

Angel Matamoros is a graphic artist at The News Tribune. I remember that just a few short years ago he expressed envy of fine artists as if fine artists possessed some kind of greatness that mere commercial artists can’t attain. And now he is a fine arts painter who manifests the kind aesthetic exploration he seemed to envy in the recent past. He’s come a long way in a short time.

Matamoros’ paintings are bold and simple forms on roughly textured surfaces with typically no more than two to three large rectangular shapes or a simple atmospheric surface with no definable shapes. The best of his paintings are all grouped together on the wall to the left as you enter the gallery. There is a group of small paintings in acrylic and mixed media, each in a monochromatic color scheme with a few rectangular shapes. The best of these are "Dunes Olvidadas" and "Su Última Palabra" (the titles are all in Spanish). "Dunes Olvidadas" is painted in shades of yellow with two overlapping dark boxes in the lower right side. Sharply incised lines that appear to be pencil lines (pentimenti of guidelines) extend into and beyond the shapes to add precise accents to an otherwise amorphous painting. This little painting may well be the best in the show. Next to it, "Su Última Palabra" is similar but duller in color, mostly browns and blacks, and is more classically balanced. The weakest of this group is "Más Allá Jardin" with its overly raw green color.

Also outstanding is "Rue St. Philip" (OK, that’s not Spanish), a large painting with three bands of color, orange, yellow and green, and excellent use of rough edges between the bands of color. This painting looks like a section of a wall on an old building that has been painted and repainted countless times.

Flynn’s paintings are highly inventive and skillfully painted, but the compositions are hit-or-miss. The works in a group of little oil paintings of flowers have can’t-miss compositions — single images smack dab in the middle like flowers by Georgia O’Keefe or Andy Warhol. Some of the flowers sport a single human eye. A similar compositional device is used in a really quirky image of a half-lemon, half-lime held in place with a clamp.

Most of his other paintings have figures in various strange settings; these are the most inventive but also the most inconsistent in composition. One called "Driven Woman" pictures a standing woman in a red dress in front of a roller coaster of a freeway overpass holding a steering wheel and pretending to drive. The relationship between the woman and the background is beautifully integrated. In some of his other paintings, such as one picturing fishermen holding a very strange fish, the artist seems to have not considered composition at all.

One of my favorites is "Her Story," a picture of a woman wrapped in a scroll, which she is reading. The scroll looks like a Grecian robe that trails off onto the floor. Behind her are classical sculptures that look vaguely familiar. One looks like George Washington, and another looks like the face of God from Michelangelo’s Sistine ceiling mural.