Little theater precocious in ‘Beauty and the Beast’ 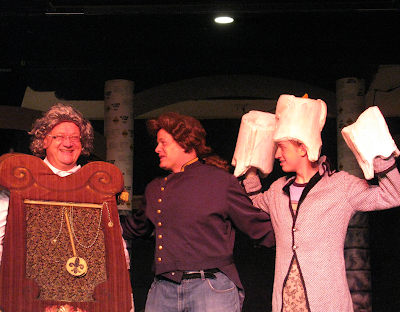 Published in The News Tribune, Aug. 14, 2009
Pictured, left to right: Micheal Carr as Cogsworth, Rusty Flounders as the prince, James Knickerbocker as Lumiere.Photo by Erin Lund

“Disney’s Beauty and the Beast” is a show ideally suited for big stages with lots of money for props, sets, costumes and lighting. It should probably not even be attempted by small community theaters, but Paradise Theatre in Gig Harbor does it justice despite a few unfortunate performances.

Paradise is the epitome of community theater. It is a place where youths and amateur actors can hone their skills, where a few imperfections are forgivable and where, from time to time, you might see the first sparks of a shooting star in development.

For example, watch out for Andrew Knickerbocker, who plays Chip. Even though his role is small, you get a glimpse here that he and some of the other young actors in this show could become well known on South Sound stages, if not beyond.

The staging, lighting and the exuberance of the cast – especially F. James Raasch as Gaston and a number of the supporting and ensemble actors – make this performance a joyful experience.

The lighting effects, most noticeably when the Beast is transformed into the prince, are worthy of larger and more professional theaters. Kudos to Jeff Richards and Mike Dullum for lighting and sound.

The sets are simple but effective painted backdrops, and the numerous set changes are done quickly and unobtrusively.

Most of the actors are excellent, from Katin Jacobs-Lake, who is in spectacular voice as Belle, to an ensemble cast consisting mostly of the Dullum and Knickerbocker families.

The five-piece pit orchestra sounded much larger than it was and added dramatic effect, especially Manny Garcia’s trumpet and Nick Richards’ percussion.

The critical roles of The Beast and Belle’s father could have been better cast. Rusty Flounders is frightening as the mad beast but not quite believable when the monster becomes more sensitive and loving, and his singing is uneven at best. Jon Elston is not convincing as Belle’s father. His old-man shuffle came across as unnatural, and he has the same silly expression on his face throughout most of the play.

Jacobs-Lake is totally convincing as Belle. She appears self- possessed and natural in the role. Nothing is forced. Her singing is clear and strong, and her emotions ring true.

Raasch’s Gaston owns the stage. Physically he is ideally cast. He is so lovable, and his portrayal of the self-centered buffoon is so funny that you almost hate it when Gaston becomes vicious near the end. His lackey, Le Fou, is played with comic exuberance and great physical action by Taylor Herbstritt.

Vicki Richards’ choreography is outstanding. The big production numbers are beautifully choreographed, and the dancing is great, with flips and handsprings by some of the preteen cast members.

“Beauty and the Beast” runs 21/2 hours, including a 10-minute intermission. The time flies by. It is a show that can be enjoyed equally by children and adults.