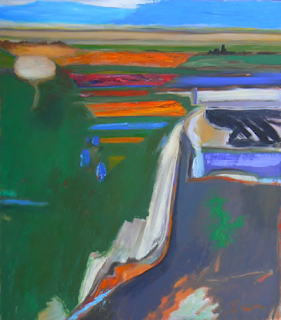 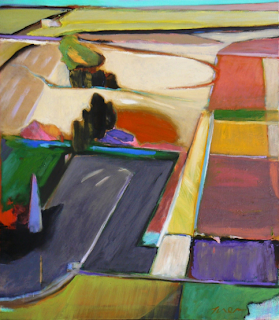 
How different can you get? William Turner — showing at Handforth Gallery, Tacoma Public Library — is old school modernist with roots in the heart of a strong Pacific Northwest painting tradition (he studied with the great Michael Spafford and Alden Mason). Eli Hansen and Joey Piecuch at The Helm epitomize the young and daring new face of art. These two shows may well represent the best in both the older and the newer generations of contemporary art. The old masters and the young upstarts.

Jen Graves writing in The Stranger said the Hansen and Piecuch exhibition is a “funny and fabulous show that includes bits of brick from Ted Bundy’s house” and something about making moonshine right in the gallery. How can you beat that? I haven’t seen this show yet, but I take Jen Graves at her word because she was cool enough to wear black-rim glasses years before they became popular. If you haven’t seen this show you might be missing something grand.

Speaking of grand, Turner’s landscapes from the “Valley” series are grand visions of cultivated land as seen from an aerial viewpoint; although they are literally viewed as seen from a passing car on the freeway. Turner says the series was originally inspired by “a little remnant of farmland I studied every evening on my slow commutes home to Tacoma from my Studio in Seattle” but were painted “in my Laguna Beach studio during our year and a half in Southern California.”

Turner is a Tacoma native and a painter whose work is well known in Western Washington (he’s shown extensively in Seattle, most notably at Foster White Gallery). Whether his subject matter is landscape or the human figure or interior scenes, his paintings are nearly always semi-abstract works that, while inspired by nature, are mostly investigations into the visual relationships between colors and shapes on a flat surface. The paintings show influences from Richard Diebenkorn and Wayne Thiebaud, two of the America’s greatest post-abstract expressionist painters.

Turner’s paintings are like jazz improvisations composed of a patchwork of contrasting colors.

The show consists of 17 paintings, most of which are three-by-four feet in size. The colors are vibrantly muted with deep purples, blues, burnt oranges and a sandy yellow tone bushed in with soft edges. Space is mostly up-tilted in a tradition going back to Matisse and Cezanne.

Among the best paintings in this show are the ones in which perspective is minimized and flowers, fields, hills, streams and sky all become patches of color, such as in "Paved" and "Skagit." Note how in each of these the areas toward the top of the canvas are lighter colors, which pull them forward. Less successful are paintings in which a winding road recedes in linear perspective.

[The Helm, Truths We Forgot To Lie About, Eli Hansen and Joey Piecuch, through March 15, 760 Broadway, Tacoma]
Posted by Alec Clayton at 8:26 AM