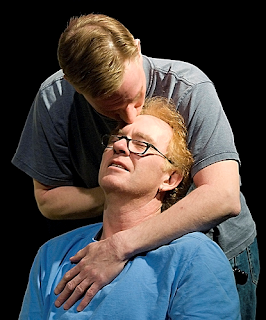 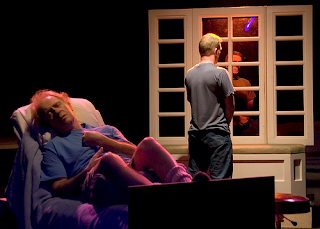 
Tim Goebel and Tim Hoban are absolutely convincing as the real-life Mitch Albom and Morrie Schwartz in Albom’s autobiographical “Tuesdays with Morrie” at Olympia Little Theatre.

Morrie was a sociology professor and Mitch’s mentor in college. Sixteen years after graduating and now a sportswriter for The Detroit Free Press, Mitch sees his old mentor on “Nightline” with Ted Koppel. He is dying of amyotrophic lateral sclerosis, commonly known as Lou Gehrig’s disease.

Uncomfortable with expressing his emotions and fearful of how to behave in the presence of a dying friend, yet moved by a sense of duty, Mitch visited his old professor. What began as a courtesy call became an every Tuesday visit, which continued until Schwartz’s death. Albom tape-recorded their conversations, and the tapes became the basis for the book by Albom, which became a made-for-television movie starring Jack Lemon and Hank Azaria and a stage play by Albom and Jeffrey Hatcher.

For director Chad Carpenter, this play is a very special project because Carpenter’s father died of ALS in February 2007. “Dad did not live with ALS as long as Morrie, but like Morrie, he continued to teach us lessons about life,” Carpenter wrote for the program director’s notes. “His sense of humor never diminished throughout his process.”

I do not know how much Carpenter may have used his experience with his father to direct Hoban in portraying a man with ALS, but I do know that Hoban is believable in this role. We watch him slowly deteriorate but never lose his courage or his humor, and we watch Goebel portray a man gradually becoming more human.

This is a story that could easily be just another maudlin disease-of-the-week show, but Albom’s writing, Goebel’s and Hoban’s acting and Carpenter’s directing keep it a story filled with heartfelt humor and compassion without the slightest trace of pity or pandering.

Hoban is a veteran of some 30-something years on stage and film, including six years performing as Edgar Allen Poe in the popular salute to Poe written by Bryan Willis, which has played throughout the South Sound region. All of that experience in stagecraft is in evidence in this role as he subsumes his own identity into the character of Morrie Schwartz.

Goebel is a relative newcomer to the stage, having been acting in local productions for about five years. Watching him develop as an actor has been enjoyable. He looked somewhat uncomfortable the first couple of times I saw him onstage; he seemed to mature a good deal in “Don Juan in Chicago” a year ago; and now he has clearly become an accomplished actor. It might also be noted that Goebel discloses in the play’s program notes that he has multiple sclerosis. “I went through a lot of the same stages that Morrie does when he is diagnosed with ALS,” Goebel wrote. He also noted that, although MS is not fatal, it is “just as potentially debilitating as ALS.”

The play is set in Morrie’s living room in Waltham, Mass. Designed by Tim Samland with lighting by Michael Christopher, the ingenious but minimalist set is highly theatrical, warm and inviting. The few set changes are choreographed almost as a between-set dance number starring two stagehands listed in the program as Tech 1 (Alison “Fab” Riffer) and Tech 2 (Felicia Durand). In a very unusual move, Riffer and Durand are given bows at the end of the show. I don’t know if their movements were actually choreographed or not, but Morrie’s engaging little dance number in the opening scene was, and credit for that must go to choreographer Ingrid Pharris.

The show is 90 minutes long and is presented without an intermission. The 90 minutes fly by.