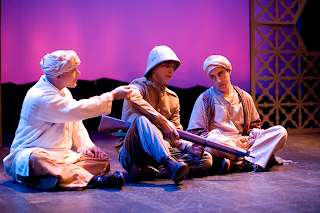 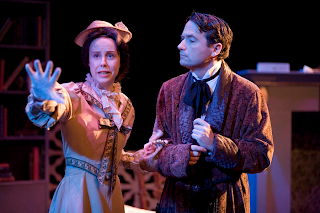 From the opening curtain it is immediately clear that the Sherlock Holmes mystery, “Crucifer of Blood” at Centerstage is going to be a highly stylized melodrama, which will probably be applauded by fans of the genre but problematic to many modern theatergoers who are not particularly enamored of Victorian-era stylization.

The stage is set when Holmes’s companion, Dr. Watson (Dean Wilson) steps out to introduce the story in a sonorous voice. The case began many years ago in India, Watson tells us. Then red and blue lights come up to bathe a latticework archway in a warm glow. Seated in the archway are two Indians, and standing in profile between them is Sherlock Holmes (Laurence Hughes) in his trademark hat, cape and curved pipe.

He walks off stage; his momentary presence enough to set the scene and the mood.
Three British soldiers: Pvt. Jonathan Small (David Roby), Maj. Alistair Ross (Patrick Allcorn) and Cpt. Neville St. Claire (Christopher Martinez) are tempted by a fabulous treasure into committing murder and robbery; and they swear one another to secrecy with a pact signed in blood -- the crucifer.

But they are haunted by a curse that is fated to destroy them.

Flash forward to London many years later. Maj. Ross is now a bitter and severely crippled old man. Bedeviled by personal demons, Cpt. St. Claire (called Nelly) is an opium addict with a dead wife and a beautiful daughter. And Pvt. Small is an escaped convict with a peg leg, having lost one leg presumably to either a shark or a crocodile, and he has come to London with murder in mind. The crime Holmes is called upon to solve has not even happened yet.

The convoluted plot unfolds gradually and involves many subplots such as Watson falling in love with Nelly’s daughter, Irene (Helen Harvester), Nelly’s opium-induced hallucinations, and dead men coming back to haunt the living. It is a long play at two hours and 40 minutes, and it drags a little in the second act, especially during an overlong scene in an opium den.

Without accepting the stylized and melodramatic nature of this play, it might appear ridiculous and over acted. The most histrionic actors are Allcorn as. the older, embittered Maj. Ross, and Roby as Pvt. Small. Both play cripples with strange ways of hobbling about -- Maj. Ross with the help of a cane and a wheelchair, and Small on his peg leg. The physical demands of these roles are severe. I especially admired the way Ross wheels around maniacally in his wheelchair, and I found Small’s peg leg to be absolutely convincing.

Many of the actors play either multiple characters or the same characters at different ages, and they handle the changes well. Wilson, for instance, easily metamorphoses from the serious and dignified Dr. Watson to the screaming, fearful and superstitious Indian Durga Dass. And Mark Waldstein plays not two but three distinctly different characters: Inspector Lestrade, a mincing servant named Birdy, and an evil simpleton named Wali Dad.

By far the most outstanding acting job is turned in by Harvester as the beautiful and sensitive Irene, who -- like every character in this play other than the unflappable Holmes -- goes through an amazing change of character.

The sets by Craig Wollam, lighting by Mark Neumann and costumes by Clare Hungate Hawk are outstanding. Unfortunately but unavoidably the audience is asked to put up with a number of laborious set changes. Usually I think it is best for theaters to avoid or minimize set changes that have to be done by actors or stagehands in full view of the audience, but in this production I think it was worth the distraction, because the story needs the flow from India to London to an opium den and to a boat on the Thames.

Fans of Sherlock Holmes mysteries should enjoy this play, but I won’t wholeheartedly recommend it to a wider audience because the acting as a whole is (debatably) a little too histrionic, because it is long and tiring in places, and because the surprise ending becomes predictable just a few minutes too soon.