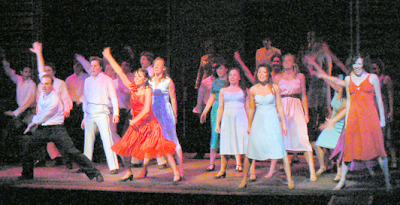 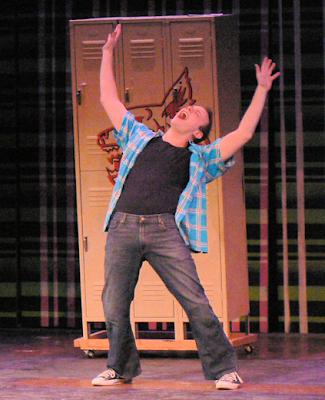 Published in The News Tribune, March 20, 2009
Pictured: Matt Posner as Ren and the ensemble cast
Photos by Kat Dollarhide

The Tacoma Musical Playhouse production of “Footloose” is a rousing musical filled with upbeat music and high-energy dancing.

The musical by Dean Pitchford and Walter Bobbie, with music by Tom Snow, was adapted for the stage from their hit movie of 1984. The TMP production, starring Matt Posner and Elise Campello, features a cast of 30 singers and dancers in a slew of joyful dance numbers choreographed by Jon Douglas Rake.

Posner plays Ren, a misunderstood and rebellious teenager, and Campello plays Ariel, the preacher’s daughter who is even more rebellious. I can’t help but think of them as a cross between James Dean and Natalie Wood in “Rebel Without a Cause” and John Travolta and Olivia Newton-John in “Grease.”

Ren’s father has deserted his family, and Ren and his mother (Ashley Middleton) move from Chicago to the small town of Beaumont (presumably Texas based on the cowboy hats and accents but presented as a much smaller town). Everybody goes to the same church, and the autocratic preacher practically runs the whole town. In Beaumont, Ren clashes with small-town morality and close-minded citizens and is cast in the role of the rebel despite well-meaning attempts to fit in.

The story is schmaltzy and predictable but forgivably so as the audience is drawn in to root for Ren and Ariel.

Posner turns in yet another outstanding job of acting, singing and dancing. He throws himself wholeheartedly into every song, whether out front in the lead or blending into the ensemble cast. His energy level is through the roof. He sets the blistering pace in the big ensemble numbers, and his love ballad with Campello, “Almost Paradise,” is heart-rending.

Showing great range as an actor, Campello goes from sexy and brash to tender and vulnerable in the bat of an eye. She sets the tone for Ariel when, once out of her parent’s sight, she slips out of her modest clothes to reveal tight shorts and an exposed midriff and she then vamps wildly to “The Girl Gets Around.”

Ariel’s best buddies at school form a terrific trio of singers’ who are more than backup as each of them gets to take the lead on various songs. They are Antonia Darlene as Rusty, Jenny McMurry as Wendy Jo and April Villanueva as Urleen. All three of these women stand out but none more so than Darlene, who has a bit more of a role than the other two and a strong, gospel-inspired voice.

Ariel, Rusty, Wendy Jo and Urleen express their romantic hopes in the song “Holding Out for a Hero” while four guys parody the Village People with a rousing stomp.

In a delightful side story, Rusty nurses a lifelong love for Willard (Nick Holub) who is sweet and goofy and not exactly the brightest kid in town. Rusty and Willard provide a constant stream of much-needed comic relief. The comical highlight of the play comes when everyone tries to teach Willard how to dance to the rousing tune “Let’s Hear It for the Boy,” belted out with gusto by Rusty.

Every play needs its bad guy, and while you would expect that to be the young tough in a leather jacket and sneer (Steve Barnett), the real bad guy in this one is Ariel’s preacher dad, played by Gregory Conn, who commands the stage in every scene he’s in. The Rev. Shaw Moore is a complex character whose authoritarian ways are based on the noblest of intentions, his love for and protection of his daughter – plus a simmering and very personal hurt. Conn brings this character to life as a bad guy the audience can identify with and have sympathy for. Plus, he sings beautifully. His duet with his wife, Vi (Heather Malroy) is the second of two breathtaking love ballads in this play.

The simple set designed by Dori Conklin is highly effective, consisting mostly of flat plaid backdrops, another flat backdrop that looked from my seat in the audience to be a pointillist painting of a rose garden and simple roll-out sets for Rev. Moore’s church and the Moore home. The scene changes are accomplished almost seamlessly with little distraction.

“Footloose” is a joyful experience.

Comments
Posted by Alec Clayton at 9:45 AM