This ‘Carol’ doesn’t quite sing 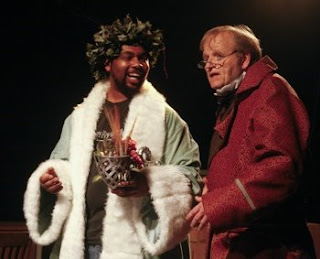 Published in The News Tribune, Dec. 26, 2008
Pictured: Mark Peterson as The Ghost of Christmas Present and Ernest
Heller as Ebenezer Scrooge, photo by Dean Lapin.

Something strange happened at opening night of Lakewood Playhouse’s “A Christmas Carol.” And I’m not talking about ghostly apparitions. I’m talking about a sudden change in the tenor and pace of the play.

It started out quite well, with a very convincing Scrooge played by Ernest Heller, a competent Bob Cratchit (Robert McConkey), an entertaining and likeable Nephew Fred (Luke Amundson) and perhaps the best Jacob Marley I’ve ever seen in the person of Christian J. Doyle.

The sets designed by Erin Chanfrau, who also wrote and directed this adaptation of the Dickens classic, were beautiful. The painted floor and backdrop are works of art – cobblestone streets with snow drifts and a city skyline almost totally obliterated by fog painted by muralist Steve Chanfrau. The ambience created by the set and by Scott Campbell’s sound effects and Kris Zetterstrom’s lighting provide a nice balance of mystery and holiday cheer.

The first ghostly effect was startling and beautifully done. An unseen figure behind what appeared to be a black door but was actually a curtain or scrim tried to push through as if attempting to break through from the other world. This, accompanied by dramatic lighting and sound effects, set the mood for what was to follow.

And then Doyle appeared, dragging his chains as the ghost of Marley, and the intensity of the performance kicked up a notch. His strange tics and spastic walk really struck at the heart of what Marley’s ghost would be like after carrying chains of guilt for seven years.

But then, just when things should have started getting really exciting, it fell flat. The Ghost of Christmas Past was emotionless, and his ghostly costume and makeup was uninspired – especially coming right after seeing Marley’s outstanding costume and makeup. And Young Scrooge (Robert Tobias) and his girlfriend, Belle (Emily Anderson) seemed to be reciting their lines by rote with no emotional investment.

And so it went throughout the visits of the three spirits and Scrooge’s visit to past, present and future. Everything seemed contrived and awkward with few exceptions (notably Mark Peterson’s magisterial Ghost of Christmas Present) until Scrooge finally woke up on Christmas morning.

One problem is that there are a lot of young, inexperienced actors who might be fine in a school production but need more seasoning before appearing on stage at this level.

And then the tenor changed again, and the Christmas morning scenes when Scrooge became a new and generous man were as joyful and as funny as one would expect.

Chanfrau deserves accolades for her writing, directing and sets. She said that she wanted to take a slightly different approach to the popular story, playing on the original subtitle, “A Christmas Ghost Story.”

“I wanted the show to be a little scary and lot of fun,” says Chanfrau. “I also wanted to keep the story short to provide the perfect holiday entertainment.” It runs a little under two hours including intermission.

Two other members of the ensemble cast deserve special notice. Kathi Aleman as a rag lady and as Mrs. Fizziwig, and Valerie Kirkwood as the second rag lady were funny and rang true to type with their broad gestures and heavy accents. Aleman really stood out. According to the program notes, this is Aleman’s first appearance at Lakewood Playhouse and her first in many years on any stage after taking a break from acting to raise a family. I certainly hope to see more of her in the near future.

To present such a well-known story as this without it seeming contrived or corny is a huge challenge. Doing it in the round is even more of a challenge, as a large part of the action had to take place off in a corner where sections of the audience had to crane their necks to see what was going on. I did not think this cast and crew succeeded as well as would be hoped, but there are certainly some entertaining moments.