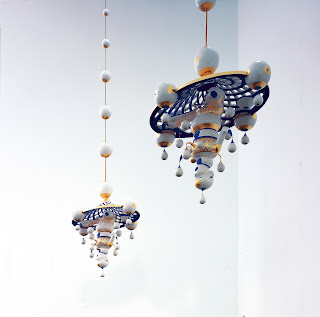 Along with the big shows at Tacoma Art Museum — Oasis: Western Dreams of the Ottoman Empire and Don Fels: What is a Trade? — there are a couple of smaller but interesting shows from the permanent collection: The Surrealist Impulse and Speaking Parts (I eliminated the wordy subtitles from both). As is typical of shows culled from museum collections, the works barely fit the show title. In the Surrealist exhibition, for example, there are works that are not really surrealistic but that are by artists who are associated with Surrealism. On the other hand, there are works in the Speaking Parts exhibition that could easily fit in the other show. And some of the artists are in both shows.

But categories and what fits where are irrelevant. What matters is that both shows include works by both famous and little-known artists from here in the Pacific Northwest — including usual suspects such as Morris Graves and Marc Toby and new stars such as Scott Fife, the sculptor who did the big cardboard dog that sits in the museum lobby — and internationally famous figures such as Pierre-Auguste Renoir, whose The Two Sisters is fabulous, and Salvador Dali, who was the most overrated artist in the Surrealist movement but whose series of prints illustrating passages from a book of the Old Testament in this show is much better than a lot of his more showy and gimmicky paintings. Wow! That was a mouthful.

Fife’s "Dresser with Drapes and Landscape" is one of my favorite pieces in the show. It is something of a precursor of his later and better known portraits of famous people in his use of archival cardboard. It is a semi-realistic dresser with drapes attached to the wall in such a way that it looks like it is coming out of the wall much in the way the train engine comes out of the fireplace in Rene Magritte’s "The Son of Man." The partially opened drawers in the dresser are high enough that most people can’t see inside them. I’ve been told that there are rumors of things inside and that viewers get on their tip-toes and stretch to try and see what’s there.

Another intriguing work is "Some Say She Lost Her Head," a video by former Tacoman Jared Pappas-Kelley. I don’t want to say too much about this film other than yes she does lose her head, and it is funny and macabre, more post-modernist than surrealistic, perhaps, but shot in a grainy black and white that pays homage to early 20th-century movies of the Surrealism movement.

Also more post-modernist than surrealistic are Claudia Fitch’s "Two Chandeliers with Milk Drops." These are playful and decorative hanging chandeliers crafted from ceramic with glazes, oil paint, gold leaf, and brass fittings. They are kind of modernist rococo, silly and decadent with gold and white eyeball balls and white teardrops and upside-down hanging Buddha clowns. Imagine a decorative chandelier by Jeff Koons, he of porcelain white Michael Jackson fame.

In Speaking Parts: Conversations between Works in the Collection (now you have the full title), works by Northwest artists are paired for comparison sake with works by international artists. Among the Northwest artists are Ambrose Patterson, Guy Anderson, Sally Finch, Toby, and Graves. Famous American artists from the other side of the country include George Luks and Robert Motherwell. I love Motherwell’s "Open No. 176."

During the holiday season when visitors come from out of state and want to see the sites, take them to Tacoma Art Museum. There’s no better way to introduce them to our rich cultural heritage. These two exhibitions from TAM’s permanent collection show our rich art history and connect it to the larger history of art from around the world.