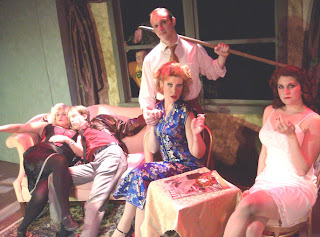 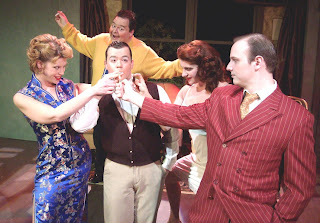 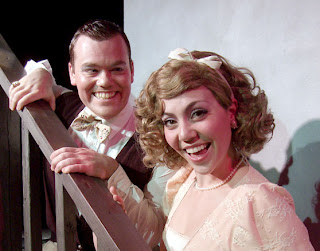 Theater Artists Olympia is an equal opportunity offender. The mad men and women of this offbeat theater company poke irreverent fun at every institution, class, race and icon imaginable. This is, after all, the theater company that produced “Cannibal the Musical,” “Vampire Lesbians of Sodom” and a strange and ultra-sexy version of Shakespeare’s “The Tempest” set in hell.

If you might be offended by any of the above, do not see TAO’s production of the Dan Studney and Kevin Murphy musical “Reefer Madness.” But if you get a kick out of such shenanigans and are tired of the usual holiday fare, by all means, see “Reefer Madness” this weekend.

This musical is a satire based on the 1936 film of the same name, which was intended to warn kids away from the devil weed, marijuana, but which became a cult favorite of pot-smoking teens in the ’60s and ’70s. Set in the 1930s but with 1950s style bebop and doo-wop and a Tom Jones-style singing Jesus, the play is a timeless romp and a very contemporary musical farce.

The modern day Romeo and Juliet of this play are Jimmy Harper (Rob Rostad), an all-American straight-A student and his wide-eyed, bobby-soxer girlfriend, Mary Lane (Erica Penn). When Jimmy is enticed into the reefer den by a ’30s-style gangster named Jack (Matt Posner, who doubles as the rockin’ Jesus), all hell breaks loose. The tragically stylized and melodramatic story of how the devil weed entices first Jimmy and then Mary into a life of carnal lust and criminality is told by The Lecturer (Elizabeth Lord). The whole thing is presented as a backdrop to The Lecturer’s horrifying speech in a small-town high school.

The role of The Lecturer was written for a man, but Lord, wearing a man’s suit, recasts this character as a stuffy, blue-nose woman who can barely contain her righteous indignation and horror. With jerky motions of her whole head and dramatic pauses, hers is a marvelous parody of a self-righteous and holier-than-thou person. Her comic absurdity is highlighted by dramatic spotlights that accompany her many appearances (lighting by Michael Christopher, who also appears in a brief cameo that is an extra-offensive surprise – be warned).

Lord also does a quick costume change near the finale for a great impersonation of Franklin Delano Roosevelt in a wheelchair.

Classically trained as a singer, Penn sings off-key and dances with exuberance as the oh-so-innocent Mary Lane. But, when she takes a toke of reefer, she changes into a lust-driven wanton tramp who later cavorts with a goat in hell.

Speaking of lust-driven, wanton women, Heather Christopher as Sally lives up to her billing as a “reefer slut.” She is like Mae West reincarnated with her big eyes, leering scowl, growling voice, hip-grinding dance moves and a sensuous body that is almost covered with a variety of slips and nightgowns. She also does great pratfalls and can’t walk up a flight of stairs to save her life.

Next to Lord, Posner is probably the best actor in the cast. He is suitably slithery as the dope pusher, Jack, and he really rocks out as a singing Jesus.

The one unfortunate drawback on the night I attended was a problem with the sound system that hopefully has been fixed. It was difficult to hear some of the dialogue and lyrics.