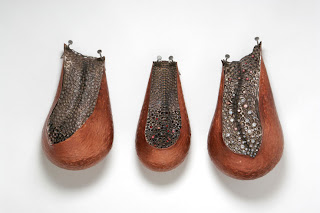 Installations at Traver and the Woolworth windows


The December snows are mercifully receding in memory, but the repercussions go on. The weather prevented me from seeing the shows I wanted to review for this week. If I had been able to make the rounds of galleries, I suspect the most interesting shows would have been at Traver Gallery and the Woolworth windows. I’m basing this on press releases and photographs of works currently on display — or in some cases images of other works by artists currently showing.

The show at Traver is called Dig. It is an exhibition of metal sculptures by Catherine Grisez. Her sculptures are enigmatic forms inspired by seedpods and root systems and other natural forms, which seem to relate not only to organic growth in the wild but also to the inner workings of the human body. A press release states with poetic flourish: “Each of Grisez’s pieces represents an experience in her life that has affected her deeply. By dissecting these symbolic organic forms scientifically, she hopes to uncover the underlying meaning of the emotional events of her life and connect them to a more universal experience. As a result, Grisez’s work communicates on a direct and powerful level — bulging seedpods strain to contain the life growing within them, precious stones spill out of a quiet, empty vessel and root systems float, exposed, in front of the viewer.”

She is not unique in sculpting organic forms. I’ve seen many abstract sculptures in glass, plastic, wood and metal that are based on similar forms, especially seedpods.

It is difficult to get the full effect of texture and scale from looking at images on the Web site (www.travergallery.com), but sizes and media are listed. The first image is called "Transmutation a,b,c." It consists of three sac-like pods hanging from big-head nails. Each is about a foot tall with the surface coloring and texture of redwood and filled with jewel-like seeds. This is my favorite of the images on the web site. It’s like a precious stone and at the same time almost creepily organic. Only her smaller works are shown on the site, but there are also some larger wall mounted sculptures and a site-specific installation of mixed media root systems suspended in the gallery’s steel framed windows. I look forward to seeing these larger works.

Speaking of root systems and organic forms, the press release for Tacoma Contemporary’s winter installations in the Woolworth windows contains a photograph of an amazing installation by Elissa Cox. It looks like the lair of the alien creatures in the movie Alien and like an organic labyrinth made of orange, red and brown thread. I say it “looks like” thread because the media is not identified. Still, it is a fascinating installation. The only problem is, it’s not what’s currently showing. It’s just a sample of Cox’s work. What she is showing is an installation created in collaboration with Tannaz Farsi and Petra Kralickova, which is described as an exploration of “the intensity and nuance of environments both dreamed or remembered. …” an abstract landscape of shapes, colors and forms (which) will both resemble the landscape of the body and a labyrinth.”

Also included in the press release from Tacoma Contemporary was a really nice looking installation by Ingrid Ludt made of what appeared to be crumbled white cloth and wadded mounds of red-orange thread. As with the Elissa Cox image, this is an earlier work and not the installation that is now showing, but it shows Ludt’s sensitivity to form and color. Her actual installation is described as “torn air filters, wire and rope that will hang from the ceiling. The wire will be used as thread connecting and knotting the pieces of torn material together in a large-scale sewing technique.”

Also included in the Woolworth windows are an "eco-highway" by Niku Kashef and a "Borrowed Landscape" by Shannon Conroy made of window decals.

[The Woolworth Windows, open 24/7, through Feb. 14, Commerce and Broadway at 11th, Tacoma, tacomacontemporary.org]
Posted by Alec Clayton at 8:50 AM