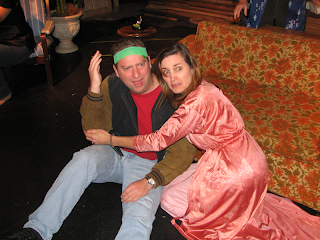 Published in The News Tribune Dec. 12, 2008
Pictured: Matt Garry and Teri DeShon in 'Run for Your Wife'


The British farce “Run for Your Wife” playing at Encore! Theater in Gig Harbor would be hysterically funny if it were not for two big problems – one of which cannot be excused.

Written in 1983 by Ray Cooney, it is a contemporary adult comedy about a taxi driver named John Smith (Matt Garry) who is a bigamist. He lives with wife No. 1, Mary (Teri DeShon) in an apartment in Wimbledon and with wife No. 2, Barbara (Jaycee Brown) in Streatham. Neither wife knows about the other.

When John has an accident and is brought home from the hospital by a policeman, his secret is in danger of being divulged because his carefully timed schedule (pronounced in the British way, minus the C) is thrown off kilter. He confesses his bigamy to his neighbor, Stanley Gardner (Mike Jones), whose bumbling attempts to help him cover up grow ever more insane. Two policemen get involved, one of whom thinks there are two John Smiths, one of whom is Stanley; and wife No. 2 thinks Stanley is a crazy farmer (a play on Gardener). When it finally becomes necessary for John to explain why he has two apartments, he “confesses” that he and Stanley are lovers and the second house is their love nest.

From here on, what was a well-constructed and outlandish comedic plot devolves into a litany of offensive gay slurs. The script takes advantage of every imaginable opportunity to use derogatory terms and introduces a new character, Barbara’s upstairs neighbor, Bobby Franklin (Chris Riker), whose sole purpose seems to be to prance about in an exaggerated parody of a stereotypical gay man.

A number of critics have concurred that this is offensive, such as New York Times critic Alvin Klein, who wrote: “It is, however, one’s responsibility to report that ‘Run for Your Wife’ also has so many potentially offensive references to homosexuality that it could set off a new wave of activism and protest against anyone who finds all that intolerable.”

The other big problem is there is no satisfactory solution to the complex problems that are introduced. John and Stanley construct progressively layered lies until there is no way out – I won’t give away the end.

The set design by Jim Cave is effective and clever, combining two apartments into one in such a way as to eliminate set changes, and the timing and movement of the actors effectively create the illusion of two sets in one. The opening scene in which the two wives simultaneously call the police to report their husband missing is a masterpiece of comic timing that is handled almost like jazz improvisation.

As for the acting, DeShon, in particular, displays a great range of outlandish emotions, and when her character takes a bottle of happy pills, she falls and stumbles with admirable comic dexterity. Jones is also outstanding. When he first appeared on stage, I pegged him as being overly histrionic, but the character of Stanley Gardner calls for nervousness and being overly excitable. Garry is also good, although he shouts too much. It would be better if he’d tone it down a notch.

I attended a Sunday matinee. The house was almost empty, but the few audience members there laughed heartily throughout. Apparently none of them thought the multitude of gay slurs and double entendres were offensive. But I cringe at the thought of a closeted gay person in the audience who may be struggling with his or her identity. What would it do to fragile self-esteem to hear audience members laughing at gay slurs?