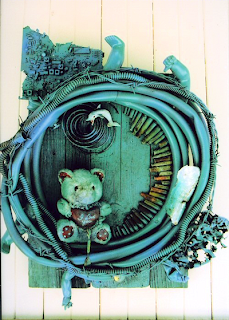 Meuse is showing a series of photographs taken in an abandoned Packard automobile plant. Who even remembers Packards? They were the last of the great American luxury cars, but they went out of business in 1958. So these photographs are a poignant and disheartening record of a better day smashed and forgotten — and hopefully not a forecast of the fate of America’s “Big Three” automakers.

Meuse’s pictures are classical in their use of balanced design and strong contrasts in black and white. Stylistically they are a lot like the great Margaret Bourke White. Many of them are close-ups of a single object: a chair, a broken broom, pieces of machinery. They are enigmatic and sad.

Lindenmeyer’s pieces are just the opposite. They are exuberant and playful. The press release called them collages, but I think “constructions made of old pieces of wood and cardboard and various objects such as dolls and bullets” would be a much more accurate description.

He is showing 14 works in all from three distinct series: Wanted, Love and Bullets and Blowout. Stylistically what each series has in common is that disparate elements come together to form a single unified image. These are Dadaistic pictures with narrative coherence. (Those who know the history of Dada understand that narrative coherence would be anathema to Dadaists.)

The best of these are the Love and Bullets series. Narrative constructs are built around a central image such as a doll or a photograph. The background and most of the various collage elements except for the central image and a few other objects are spray painted a single color (a different color in each work but almost a monotone within each). The colors are rich and bright but slightly smoky. He does marvelous things with deep blues and bright reds that look like fire (blue fire? Yes) glowing through smoke.

Girl of the Golden West features a photograph of a woman wearing an Indian skirt and leather vest leaning seductively in the doorway of a saloon. Surrounding her is an ornate old picture frame and a tangle of black hose spray painted gold. Surfin’ has an Eskimo doll on a red surfboard on a crescent shaped background in deep cerulean blue with bullets and a hunk of an old tire and a circuit board all painted blue. High Voltage features a string of firecrackers painted hot pink.

The Wanted series is less attractive and less cohesive visually but highly inventive and funny. It’s a bunch of wanted posters on pieces of old board that could have been ripped off of a Wild West building. The criminals on the posters include a guy named Reginald Van Brushstroke, wanted for making “Bad Art,” and a woman named “Acid Annie,” who is wanted for running an unlicensed speakeasy.

I would not call any of this great art, but Meuse’s photographs are strong pictures in a respected tradition, and Lindenmeyer’s constructions are skillfully put together and full of invention.