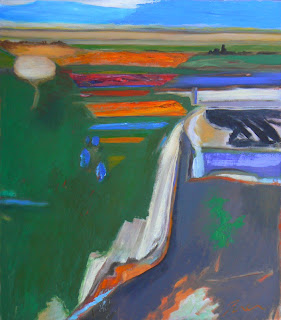 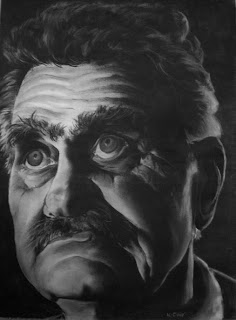 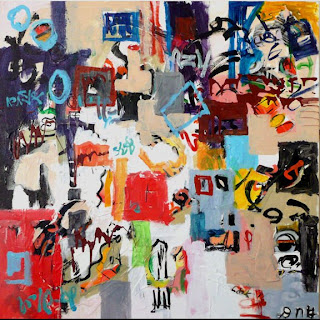 In all the years I’ve been reviewing art exhibits, I’ve never reviewed one at Pierce College, mainly because college art galleries are terrible about not notifying the press of their shows. But the new gallery director at Pierce College, Jennifer Olson-Rudinko, who also runs the gallery at Tacoma Community College, invited me to this show. Thank you, Jennifer.

It’s a small show with no more than 18 pieces hanging on the wall and a single little sculpture by LeeAnn Seaburg Perry, which is very sweet but easily overlooked. The vast majority of these works are photographs, and few of them stand out. They’re mostly landscapes — some quite beautiful but not unlike a million other nice pictures — and two very nice photos of Frank O. Gehry buildings. You can’t go wrong there. Any photo of any Gehry building taken from any viewpoint is going to be attractive. It just can’t be helped.

Kathryn Baur’s charcoal drawing of a middle-aged man, titled "Byzantine" — despite looking like a very competent student drawing, which it’s not — is one of the most striking pieces in the show. The larger-than-life head is dramatically posed, and the dark and light contrasts and subtle shading go from velvety black through shades of gray to brilliant white. The face has huge eyes, shaggy eyebrows and an intense expression.

Next come two acrylic paintings by David N. Goldberg, "Mythos" and "Zones." These may be toss offs. They’re not the best Goldberg paintings I’ve ever seen. But they’re still the best things in this show. Both are abstract paintings with hints that they may have been inspired by urban scenes or perhaps bits and pieces of mechanical equipment or computer circuitry. Circles and half-circles and squiggly blobs of paint dance in apparent randomness over a field of squares and rectangles in a cacophony of color. The patterns in "Mythos" are overall and sort of fit into a grid with all of the shapes approximately the same size. "Zones," which I think is the stronger of the two, has a less regular pattern, and there is greater variety in the sizes of the squares and circles and dabs of color. This one looks more like an urban scene. You can almost make out buildings and walking figures and scribbled but unreadable graffiti.

Next to Goldberg’s paintings are two abstract landscapes that are similar to works by Richard Diebenkorn, but not nearly so solidly structured. Despite some obvious differences between these two paintings, they are enough alike that I thought they were by the same artist until I read the labels. One is "The Valley - Skagit," oil on canvas by William Turner, and the other is "River to Ocean," acrylic by Sarah Kemp Waldo.

Turner’s painting breaks the Skagit Valley fields of flowers into rows and planes like shards of glass with rectangles and triangles of vivid red and orange receding in the distance to a serene mountainous horizon. The paint application is expressive and goes from flat and loosely brushed to a heavy impasto in the red and orange bands.

Waldo’s is less abstract with hills separating bodies of water in large areas of freely applied color. In both Waldo’s and Turner’s landscapes perspective is tilted upward to create areas of relatively flat color in shallow space. Both are well designed, but I was not comfortable with the colors — dark greens and grays in Turner’s and light blues, tans and yellows in Waldo’s. In each, the color schemes are interesting but slightly off key. In Waldo’s painting, for instance, everything except for one large yellow area is close in value and intensity, but that one big yellow blob breaks up the unity of the composition.