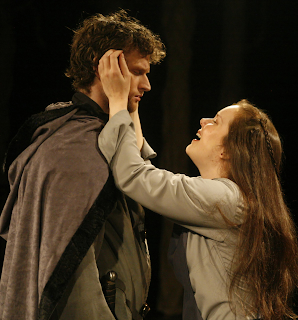 I’ve seen quite a few performances of Shakespeare’s “Macbeth,” and the one now playing at Lakewood Playhouse is the best in my memory. The dramatic staging and lighting, the sets and the acting are all outstanding. Special kudos to director Scott Campbell and costume designer Naarah McDonald.

One of the best things about this performance is that all of the actors clearly enunciate their lines while remaining fully in character and not sounding like they’re making an effort to articulate well. That might seem insignificant, but since Shakespearean language is hard for many contemporary Americans to understand, it is important.

The one thing that is not outstanding is the sword fighting. The fight scenes seem a little anemic to me, but that does not bother me much as the play is about the human conflict, not physical fights.

Erin Chanfrau’s scenic design smartly creates a mood rather than a specific look of various scenes, and the movement of props on and off stage is kept to a minimum. Gnarled tree limbs made of twisted brown paper line the entries and three walls of the theater – which is simple, creative and highly effective.

Bryan Bender plays Macbeth, the anguished general of the Scottish army, whose blind ambition, aided by the machinations of his treacherous wife, drives him to murder the good king Duncan (Christopher Gilbert). This is a tough role to pull off because of the intensity of Macbeth’s anger, fear and sorrow. It is a role that could easily be overly dramatized. Bender plays it with controlled intensity – likewise Rebecca Wood as Lady Macbeth.

Unlike the complicated Macbeth and Lady Macbeth, King Duncan is transparent in his simple love of his country and his fellow men. Gilbert fills the role with natural grace, easily conveying the good king’s naiveté. And then, after Duncan is murdered, Gilbert ably doubles up in the roles of Old Siward and other minor characters.

Luke Amundson is outstanding as Macbeth’s friend and fellow general, Banquo, who is murdered by his best friend and comes back as a ghost to haunt him. His bloody makeup is remarkably grotesque.

Also outstanding in a variety of small roles is veteran South Sound actor Scott C. Brown. Since Brown has played many lead roles (most notably R.P. McMurphy in “One Flew Over the Cuckoo’s Nest” and Salieri in “Amadeus”), his appearance in this play as various soldiers amounts to a series of cameos. And he really stands out in his brief comical turn as the drunken porter. This small scene is the epitome of comic relief.

Finally, a word about Rebecca Wood. She is the first Equity actor ever to appear on the Lakewood Playhouse stage, and she is absolutely believable as the strong-willed and devious murderess who succumbs to madness when overwrought with guilt. Lady Macbeth does not have as much time on stage as her husband, but in her scenes all eyes are riveted on her.

The staging, lighting and costuming of the three witches and all of the attendant hocus-pocus and supernatural weirdness was done with great style and just the right touch of theatricality to be effective without overwhelming the narrative. And, while all of the witches are good, I was especially impressed with Katy Shockman in her Lakewood Playhouse debut.

Finally, a word about Josh Johnson pounding on the big drum at every scene change – what a wonderful way to bring actors on and off stage.

If you like Shakespeare, no matter how many times you may have seen “Macbeth,” and even if you are not familiar with his plays, I think you’ll thoroughly enjoy this one.