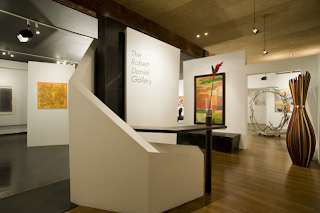 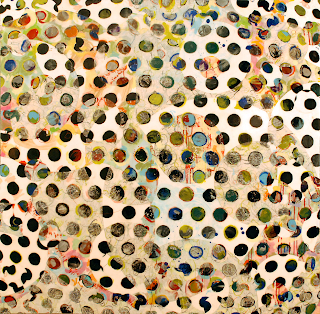 Pictured: installation shot of gallery and "while you're here," acrylic on panel by Tad Crawford. Photos courtesy Robert Daniel Gallery.

Listen up, Tacoma. There’s a new gallery in town, and it’s the real deal. It doesn’t look like much from the outside, a nondescript warehouse on the corner of Fawcett and 25th Avenue. But inside it’s big and bright with four major gallery spaces plus a whole bunch of alcoves and smaller exhibition spaces. And the paintings and sculptures inside are all abstract works of the type you might expect to see in a designer’s showroom or in a major city gallery — you know, like that city up north. In fact, at least one of the artists in the current show, Patricia Hagen, is a painter whose work I’ve seen in Seattle.

My one hesitation in giving this gallery a rave review is that a lot of the work is a little too slick.

I can’t begin to review them all, so I’ll just say a few words about the ones that impressed me the most, starting with Hagen.

Hagen paints abstract biomorphic forms that float on a mostly milky white background, with wonderfully subtle color changes and textures in the background and wet looking, loosely drawn forms in front. Some of them look a whole lot like paintings by Phillip Guston although Guston’s paintings are figurative and hers are abstract. Her surfaces are wonderfully rich and gooey like cake frosting. There is one painting of hers that I didn’t like. I didn’t take note of the title, but if you visit the gallery you’ll know which one I’m talking about. It’s the one that’s very tightly controlled and carefully painted. The others are less precise and more spontaneous, and that’s her strong suit.

The other artist whose work I really like is Crawford. His most outstanding work is a large piece called "while you’re here." Large prismlike circular forms that look something like lenses float over a deeply layered background, and superimposed over this is a grid of black circles that cover the entire surface. Painted in acrylic with paper and resin, this picture has an amazing illusion of shallow space as if you’re seeing through layers of glass, and the whole painting seems to bow out in the middle. But that’s an optical illusion.

A similar depth illusion takes place in a piece called "Hindenburg," which has red and brown circles floating over a sea of bright yellow. And he has a group of three small paintings with the same kind of spatial effects on a mostly white background that looks as cold and clear as fresh snow. Plus some nice little drawings in paint of tools that remind me of some of Jim Dine’s tool paintings — same kind of sure graphic touch — and one painting with semicircles on a grid that remind me of paintings by David Goldberg, one of my favorite Tacoma painters.

Another painter whose works complement Crawford’s is Glass. He also fills the surface with prismatic forms on a grid, but his shapes are squares filled with energetic marks that seem to be derived from fronds and blades of grass with dark and acidic colors.

I also was struck with Hoppin’s unique sculptures of animal heads that look like hunting trophies but in jewel-like colors. I didn’t ask about the media, but they look like they’re coated with hundreds, if not thousands, of tiny ceramic tiles.

The Robert Daniel Gallery may be off the beaten path, but I recommend beating a path to its door.

The animal head sculptures by artist Christopher Hoppin are actually covered with tiny glass beads and different metal tacks and nails. Painstakingly applied to create the illusion of fur and skin.