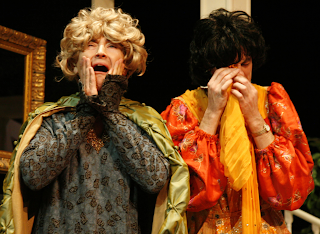 This review was supposed to have been printed in The News Tribune Friday. Since I don't get the print version of the paper, I can only assume it was published on schedule, but it never showed up in the online version. I don't know what happened. Also, since subscribers to my blog get new posts the day after I put them up, some will not get this until Sunday, Nov. 16, and Sunday's matinee performance will be the final performance.


Director Doug Kerr does all he can to make a rousing entertainment of Ken Ludwig’s marginally funny “Leading Ladies.” As farces go, this one is in league with Ludwig’s “Moon Over Buffalo” and “Lend Ma A Tenor,” but I don’t think it compares with such outrageously funny farces as Larry Shue’s “The Nerd” or “Foreigner” or the similarly farcical English pantos that play every year at Centerstage. Nevertheless, there are plenty of laughs in this nutty little comedy.

The story is slow to develop. Two has-been Shakespearean actors with the corny names Leo Clark (Bill Read) and Jack Gable (Lew Gorman) try to pass themselves off as girls Maxine (Read) and Stephanie (Gorman) in order to bilk an inheritance from a dying old lady, the girls’ Aunt Florence (Dana Galagan), who stubbornly refuses to kick the bucket.

Clark and Gable’s two-person “Scenes from Shakespeare” at the local Moose Lodge is cleverly written, but Read and Gorman are no better and no worse as the inept thespians than a slew of other comic actors playing bad Shakespearean actors. And when they plot their devious scam on a train trip to York, Penn., the jokes fall a bit flat despite the energizing presence of Audrey (Alexandra Hockman) a sexy bubblehead on roller skates wearing a 1950s carhop costume.

The laughs don’t really start coming until Gorman in drag as Stephanie, who is supposed to be deaf and dumb, starts talking. And then it shoots off into comedic orbit in the second act when Dr. Meyers (Michael Dresdner) and his son Butch (Blake R. York) both try to seduce Stephanie, who (remember she’s really Jack Gable) is constantly trying to seduce Audrey -- which he does whether as himself or as Stephanie. The big seduction scene is by far the most hilarious moment in the play. Dresdner -- proving his natural comic ability again -- is outstanding, and Gorman in drag is almost as sexy as the luscious Audrey and fabulously ambiguous in his/her gender roles.

There is not a bad actor in this play, but some shine much more than others -- probably due more to the nature of their characters than their acting skills. Mick Flaaen, for example, is believably greedy and arrogant and uptight as the very unlikable character, The Rev. Duncan Wooley, but it is hard to enjoy this character (he’s not even fun to dislike). And although Read does everything you could ask of an actor playing a bad actor pretending (badly) to be a woman, he is too much like too many other actors playing similar roles. From “Twelfth Night,” which they parody well, to “Some Like it Hot,” this is a comic bit that’s been done far too often.
On the other hand, Gorman brings an indefinable flair to a role that’s been done too much, and lifts it above the mundane. His sly winks and nods and his girlish walk and the seamless way he transitions from male to female all make his characters shine. If anyone can be said to make this show, it is Gorman.

Also delightfully charming in their unique ways are Molly Calender as Meg Snider (((cq))), Rev. Duncan’s fiancé who falls in love with Leo (or actually Maxine), and Galagan as the feisty spitfire Aunt Florence.

Kerr does an excellent job of directing, and he is responsible for a well designed set -- the living room of the Snider house. I particularly like the doorways and beams that cutoff in mid air and the painting and mirror that float over blank space.
Farce is one of the more difficult of genres to perform, as Kerr explains in a program note: “Playing farce well demands that the performances seem natural and right. …actors must play their roles honestly and sincerely while inhabiting a world that is full of improbabilities and silliness.”

It’s not meant to be great theater, but it is a lot of fun.