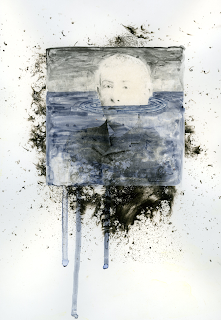 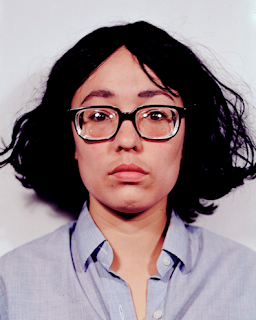 The art in Black Front Gallery’s latest show is more conceptual than visual.

Erica Lord, a visual arts teacher at The Evergreen State College, is a photographer, sculptor and installation artist who brings a mixed-race heritage to her identity-based art. And when I say mixed race, I mean really mixed. Try Athabaskan, IÒupiaq, Finnish, Japanese, Swedish, and English decent.

According to a gallery statement, her art explores race, ethnicity, and gender. Take, for example, a group of some 25 Polaroid self-portraits arranged in a diamond shape on the gallery wall. The photographs, each about four inches square, are priced individually but really should be viewed as a single multi-part work of art. Different hairstyles and color, changes of clothing and a range of facial expressions make these look like portraits of 25 different people, each of whom looks a little bit like Lord. The arrangement, by the way, makes it hard to count the photos. I tried three times and came up with three different numbers.

Also on this wall are a human hairpiece and two black-and-white negative photographs of the hairpiece. I don’t get it at all.

Two long photos of extended arms with mysterious numbers printed on them make for a striking image, but (again) I don’t get the significance of the numbers.

Lord’s most striking pieces are two very large prints documenting a woman placing pieces on what looks like a stone totem. The woman (possibly the artist?) is seen in silhouette against a sunset sky, as is the totem, which looks like a section of Stonehenge. It is called Trash Totems, Fairbanks, AK.

What I found most interesting in this show was Matt Hamon’s mixed-media photo-drawings. There are about 20 of these. They are photograph transfers combined with drawing and printing techniques and a thin varnish that looks like it was puddled on the paper, creating an uneven coat of a waxy, transparent, yellow-brown color. The photographic images are of faces. They appear to be very old, possibly found images (my guess would be from the first half of the 20th century). Some of the portraits are subtly manipulated, and others are combined with drawings or prints of animals and human organs (hearts, for instance).

Among my favorites are three portraits of the same man displayed side by side with slight variations picture to picture. They are titled Croon, Chimera and Ambergris. In Croon, the man’s lips are red as if wearing lipstick. In Chimera, one eye is bruised, red, and swollen almost shut. In Ambergris, a red trickle of blood drips from his nose. What make these interesting are the slight variations and the real-but-not-real look.

A similar kind of surrealism can be seen in Corona, a man’s face with a superimposed pink bunny. This one is also real-but-not-real because the bunny face would be impossible. But it could be a mask.

Finally, there are a few mechanical sculptures by Kirk Lang that feature gears and wheels and tightly wound springs that look like the inner workings of old windup clocks. These are interactive pieces that can be wound up and played like musical instruments. They tease the mind with elements of time and motion — time being something that is perceivable only in the presence of motion or change. To see them move, you have to ask a gallery attendant to wind them up, and with one piece in particular, you have to be very patient because it rings out like a chime only once every 15 minutes.

These are works that I find to be more interesting to think about after the fact than to actually look at, but you may react differently. Drop by and see what you think.

the tattooed numbers on the arm immediately reminded me of concentration camp inmates. the Nazis also collected the hair of their Jewish victims, perhaps the images allude to the Holocaust/antisemitism/genocide?

Good thought, Ruby. I didn't know about the Nazis collecting hair, but that certainly fits.