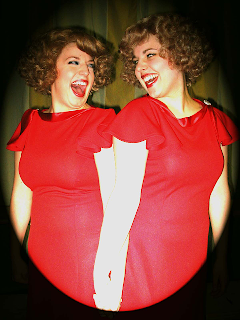 Chris Serface graces the Capitol Playhouse stage with the best performance I’ve seen from him since his wonderful turn in “Beauty and the Beast” at Tacoma Musical Playhouse a year ago. Bruce Haasl also turns in what may be his best performance ever, and Matt Posner and Geoffery Simmons continue to astound audiences with their singing and dancing – and those are just a few of the supporting actors in Capital Playhouse’s production of the stirring musical “Side Show.”

The lead actors are two women from New York, Megan Rozak and Elyssa Samsel, in their first Northwest performances.

“Side Show” is a musical loosely based on the true story of Daisy and Violet Hilton, conjoined twins who began their entertainment careers as “freaks” in a sleazy sideshow and became popular vaudeville stars.

Both Rozak (playing Daisy) and Samsel (as Violet) have performed in national tours as well as off-Broadway cabarets in New York. Also from New York, director and choreographer Keith Andrews has more than 50 shows to his credit, including national tours of “The Full Monty” and “Hello Muddah, Hello Faddah.”

Following on the heels of the successful run of “Sweeny Todd,” this is the second time this season that Capital Playhouse has brought in major New York talent, but the local talents in this production hold their own and then some.

This show uncovers a dark side of show business: the exploitation by carnival shows – and to a lesser degree – vaudeville, of people of other races and cultures and those who are born different than the so-called norm. The freaks in the sideshow are put on display like specimens in a museum, under the ruthless rule of the carnival boss (Serface). A tattooed man (Simmons) acts as if he is a wild and vicious cannibal king whose handlers are barely able to subdue him in a performance put on for the delight of audience members seeking the thrill of a good fright.

Among the sideshow performers are a sheik (Jerod Nace) and a geek (Adam Randolph), a fortuneteller (Sara Flotree), a harem girl (Heather Christopher) and even a man with a false beard playing a bearded lady (Matt Flores). But the big stars are the Siamese twins Daisy and Violet, who are forced to strip for men, including private performances for extra pay (which goes to the boss).

Promoter Terry Connor (Haasl) hires the sisters, saving them from the sideshow and making them into glamorous vaudeville stars.

Love comes into their lives in the person of Connor and the sisters’ voice coach, Buddy Foster (Posner). But love with conjoined twins presents problems, and the question arises: Do Connor and Foster really love the sisters, or is theirs just another more subtle and insidious form of exploitation?

Rozak and Samsel are well cast as the twins. They are lovely to look at and have powerful voices. But where they really stand out is in the dance numbers, which are kept simple but are beautifully choreographed. And they do it all while joined at the hip.

Serface is the perfect overblown bad guy. He’s a big man with a growl in his voice and an evil leer.

Posner, known for his standout performances in “Damn Yankees” and “Urinetown” at Tacoma Musical Playhouse, comes across as sincerely in love and sincerely conflicted, and once again his singing is a power to be reckoned with. And Simmons, the man who did the amazing “Viper” song in “Ain’t Misbehavin’” both at Capital Playhouse and Tacoma Little Theatre, rocks the house on “The Devil You Know” and tears at heartstrings in the big ballad “You Should Be Loved.”

Andrews’ direction and choreography, Matt Lawrence’s lighting, costumes by Tom Hudson and, above all, the music by Troy Arnold Fisher’s orchestra all come together to make for an uproariously spectacular evening.