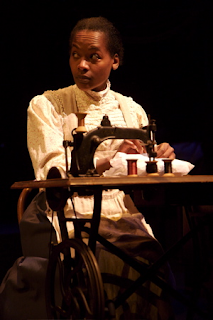 As the play opens, a demure woman walks out on stage and sits down at her sewing machine. She is Esther Mills (LaVon Hardison), the daughter of freed slaves from North Carolina. The year is 1905, and the setting is her room in Mrs. Dixon’s (Vanessa Lichty) rooming house, where Esther has lived and worked since coming to New York as a teenager 18 years earlier.

Behind her is an old brass bed covered with a patchwork quilt. At stage right, we see the dressing room of Mrs. Van Buren (Deya Ozburn) an upper-crust white woman. At stage left is an upright piano and a four-poster bed in the home of a black prostitute named Mayme (Amber Wolfe). Upstage center is the modest Garment District shop of Mr. Marks (Jason Haws), a Romanian Jew. And on a balcony high above center stage is the jungle setting of the Panama Canal, where we find a proud working man, George Armstrong (David Dear).

Mrs. Dixon comes in all aflutter about the upcoming wedding of one of the girls in the rooming house, but Esther confesses it only makes her sad because she is 35 years old and has probably lost any chance of finding a husband. Through much struggle and patience, Esther has found a way to make a living for herself designing and sewing fancy undergarments – primarily corsets – for wealthy white women and black prostitutes in the Tenderloin District. She has a dream of someday owning a beauty parlor, and throughout all the years she has been sewing undergarments she has been hiding away money inside her quilt to open that business.

Quietly honest, smart and unassuming, Esther builds highly personal and complex relationships with Mayme, Mrs. Dixon, Mrs. Van Buren and even Mr. Marks, from whom she buys fabrics. Each of them love her in his or her way, and she them. Most achingly poignant of all is the unexpressed love between Esther and Mr. Marks, because they each know the other is untouchable. (He is engaged to a woman back in Romania whom he has never even seen – an arranged marriage – and his religion prohibits a betrothed man from even touching another woman.)

Then George Armstrong comes into Esther’s life via romantic letters written to her all the way from Panama. George is sweet and loving, but there comes a time when he is revealed as being not at all what he seems to be. But then neither is Esther or Mrs. Van Buren.

Written by Lynn Nottage and winner of the Drama Critics Circle and Outer Critics Circle Awards for 2004, this play is destined to become a modern classic, and Nottage is surely destined to join the ranks of such noted African American playwrights as James Baldwin and August Wilson.

The Harlequin Production cast is top-notch. Hardison and Dear shine, Hardison for her quiet dignity and Dear for his volatile temper, convincing personality changes and a spot-on Caribbean accent. Haws is radiant. He comes across as an utterly sincere and loving man, and he does a good job capturing the speech patterns of a Jewish immigrant.

Linda Whitney has outdone herself as both director and set designer. Her blocking of the action is unique and effective. There are no set changes, but numerous scene changes are done with movement and with lighting by Carolyn Arnold. Often, scene changes and movement through time are created symbolically through silent tableaux that are beautifully done. Throughout the play, realism is skillfully interwoven with stylized and symbolic staging, a kind of theatrical accomplishment that can happen only when cast, crew and director are in true harmony.

Special notice must also be given to costume designers Darren Mills and Asa Brown Thornton, especially for their corsets and nightgowns and the wonderful long gray coat Esther wears when she goes out.

“Intimate Apparel” runs two and a half hours including a 20-minute intermission, but the time went by so quickly for me that I had to check a clock as I left the building to see if it was really 10:30 p.m.