‘The Sisters Rosensweig’ gets off to rocky start 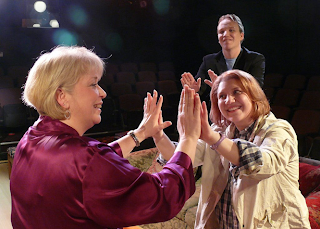 
Wendy Wasserstein’s “The Sisters Rosensweig” received uneven reviews when it premiered in 1993. Frank Rich of The New York Times called it “a generous group portrait,” and Jeremy Gerald of Variety called it “mean-spirited.” This seems to be typical of critical reaction to Wasserstein’s plays. According to BookRags literary criticism, critics have called her characters colorful and engaging but stereotypical and predictable.

I was disappointed by the Olympia Little Theatre’s current production of “The Sisters Rosensweig,” but I noticed that some people in the audience seemed to react with enthusiasm. Perhaps it’s one of those plays you either love or hate.

I felt there were two major problems with this production. The biggest one had to do with the play itself. I think Wasserstein tried to do too much with too little, attempting to wrap together humor and drama with political and social commentary. She attempted to deal with class and religion and world politics in what was essentially a drawing room romantic comedy. A good editor could have cut out about half an hour and made it into a much better play.

The other major problem was that the cast needed more rehearsal time. There were far too many moments when I saw actors visibly struggling to remember lines in this way-too-wordy play.

Still, some of the comedy bits were fun, and with the clash of generations, Jewish tradition, family drama and a gay theatrical producer dating a straight woman, there is certainly a little something for everyone in this play.

Sara Goode, née Rosensweig (Maureen O’Neill Stull) is an American expatriate living in London. She’s an international banker, a woman successful in business but not in love.

It’s Sara’s 54th birthday, and her two sisters come to London to help her celebrate. The youngest sister, Pfeni (Sariah Murdock) is a writer and world traveler who occasionally writes meatier pieces than her usual fluff travel stories. Her boyfriend, Geoffrey (Erich Brown) is a flamboyant theatrical director who claims to be bisexual but is really gay. After declaring his love for Pfeni, he confesses that he “misses” men. The other sister is a housewife and talk show “counselor” – a kind of female Dr. Phil – who can’t resist giving advice whether it’s wanted or not and who rambles interminably about her desire for expensive clothing.

Into this stew come Geoffrey’s friend Mervyn Kant (W. Steve Nuehring) and a snotty British gentleman named Nicholas Pym (Derek Werrett). Mervyn is a Jewish furrier from the Bronx who insinuates himself into the family in ways that would get him kicked out of most households, yet all three of the Rosensweig sisters seem to love him – most reluctantly Sara, who ends up sleeping with him and then drops him like yesterday’s flavor.

By far, the most interesting characters in this play are Geoffrey and Mervyn. Nuehring is the most accomplished actor in the cast. He plays Mervyn as a complex character who is alternately slimy, ingratiating and insightful, effortlessly gliding in and out of a variety of expressions and accents. Matthews does a good job in his small role, portraying the revolutionary youth, Tom. And Brown minces his way through comedic and musical camp in ways that verge on the edge of bad gay stereotyping (mentioned in other reviews, indicating a problem beyond the actor’s interpretation). Some of his comic antics are grand – especially dancing in his underwear while imitating Motown girl singers – but I can’t help but think Geoffrey would be more effective overall if played seriously.
Posted by Alec Clayton at 9:49 AM