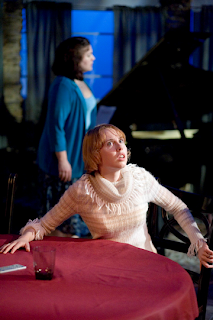 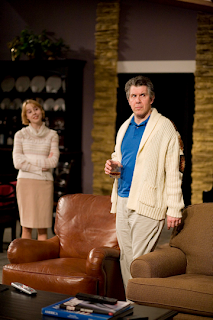 In the late ’80s, Alan Bryce wrote and produced a thriller in the Grand Guignol, or theater of the macabre, tradition called “Nightmare of a Married Man.” It was a hit in London’s fringe theater, the equivalent of New York’s Off-Broadway.

Now, 30-some years later, he has updated the play and moved it from England to America in an unspecified but contemporary setting (people watch “Wife Swap” on a flat-screen television and Barack Obama is running for president).

“I had always felt that stage thrillers never addressed the real world,” Bryce said. “Whether it was Agatha Christie and her high-society types or the assortment of artists, playwrights and theatrical caricatures that seem to populate more contemporary thrillers. I wanted to write a play with all the twists and turns of the genre, but set in a world most theatergoers could relate directly to. So I set it in the suburban world in which I grew up.”

Bryce’s revision of his earlier play is much more than a genre thriller. There are also elements of contemporary adult drama reminiscent of Edward Albee. (Lisa Viertel and Bob DeDea bring to mind Richard Burton and Elizabeth Taylor in “Who’s Afraid of Virginia Woolf?”) And although it is played as straight drama with no obvious comedic twists, it is laugh-out-loud funny.

The four-person cast led by DeDea in an acting tour de force worthy of Burton in the aforementioned play is terrific.

Greg Heinzle’s set is beautiful and comfortable. Everything takes place in the dining and living rooms of a single suburban home with upper-middle class furnishings. A realistic backdrop and translucent drop-ceiling panels with soft lighting provide a comfortable and welcoming atmosphere. There are also a couple of surprising special-effect props that are worthy of note, but which I can’t mention without giving away plot twists (props by Maya Borhani, Seattle Scenic Studios).

Adding considerably to the overall effect is music by Dawn Clement, which sets just the right mood (lush and inviting in contrast to the macabre elements of the play).

But most outstanding of all is Bryce’s script. It not only tells a good story with all the twists you’d expect of a thriller, but also it is good literature with well-chosen metaphors and attention to character quirks and lots of foreshadowing, such as the repeated references to cutting and slicing. Even if this play were not labeled a thriller, there are enough hints to keep the audience in suspense knowing that sooner or later somebody is going to be killed.

Some of the plot twists are so critical that I can’t even fully identify the characters without giving something away. Suffice it to say, two couples, Yvonne and Gordon (Viertel and DeDea) and Steven and Anita (Jeremy Topping and Helen Harvester) live next door to each other. Beneath a scrim of respectability and good humor, they absolutely despise one another. Any one of the four could be capable of murder. Equally, any one of the four might deserve to be knocked off.

One of the men is a clueless idiot who lives for reality TV and sports. He is far more than merely insensitive to other people; he is totally oblivious to them. One of the women seems sweet and innocent, but it becomes evident almost from her first words that her innocence is a mask for a devious heart. The other man seems to have a heart filled with love and devotion, but he is a heartless man who uses other people to bring cheap thrills to his boring life. His wife finds him disgusting, which he is, so she finds solace by sleeping with other men. Both couples are childless, and they rarely if ever have sex (at least not with their own spouses).

There is a murder, but the play is not a whodunit. Who did the deed is not as important as how and why he, she or they pulled it off. It is gruesome and shocking, but there is only a hint of blood, and everything is done in ways that would not upset any but the most squeamish of theatergoers.
Posted by Alec Clayton at 10:20 AM