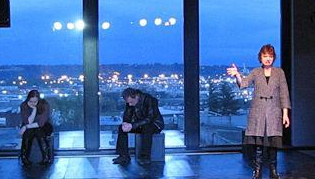 reviewed by Alec Clayton
Published in The News Tribune, April 20, 2012

Director David Domkoski created Assemblage Theater specifically to produce a single play: Mark O’Rowe’s gritty and poetic “Terminus,” winner of a “Fringe First” award in the Edinburgh Festival. It is so dark and graphic that few American theaters are willing to produce it, but Domkoski said as soon as he read it, he knew he had to.

The Space is bare with black curtains and an empty stage. There is nothing on the stage other than three black boxes in front of floor-to-ceiling windows that open onto a view of Tacoma’s industrial waterfront that includes a group of tower cranes. It’s an appropriate backdrop for a play in which a woman falls from a construction crane only to be saved from death by a demon made of worms. A demon who makes love to her. Tenderly. And surprisingly so for a play full of graphic language depicting sex and violence.

“Terminus” is written entirely in rhyme and is presented through a series of overlapping monologues by three actors, superbly directed by Domkoski. The characters take turns stepping forward to tell their personal stories directly to the audience. When not sharing tales, they sit silent and almost frozen on the black boxes. Their stories seem random and unconnected but gradually begin to overlap and connect. The characters are: a volunteer at a crisis line whose empathy leads her into and out of unexpected savagery, a young woman who is set up by her best friend to be seduced or raped by the best friend’s husband, and a serial killer with a poetic soul who is betrayed when he makes a pact with the devil.

The actors are Kathi Aleman, Nicole Lorayne Lockett and Tim Hoban. They are each outstanding. Aleman conveys emotions so intense, it is hard to take it when she stands downstage and shouts at an audience within whispering range. And then she suddenly changes from shouting to a whisper that forces audience members to sit up and listen harder.

Lockett is genuine and sweet in her portrayal of the woman who falls from the crane. Her descriptions of lovemaking are lovely and lyrical.

Hoban is the killer whose spirit speaks to express a roller-coaster range of emotions that make the audience flinch and cringe and embrace one after another.

The verbal pictures painted by these actors are harsh, gritty and doggedly realistic; and yet the play is lyrical. The language is like a melding of Stoppard, Mamet and Shakespeare with Anthony Burgess’s “A Clockwork Orange.” Everything is told in rhyme, but not in any conventional meter. The rhyming words do not always fall at the end of lines but seem rather random, conversational and sometimes startling. Often O’Rowe will string together two, three or more rhyming words in succession to build to an emotional crescendo, and he alternates between short, staccato sentences and long, flowing ramblings.

There is a contrast between surprising changes in rhythm and pacing, and a regularity of structure. The actors take turns with their monologues in a predictable pattern: Aleman followed by Lockett followed by Hoban and then repeat and repeat, each monologue about the same length and each overlapping for a few seconds as one actor sits down and another rises to the accompaniment of original violin music composed and performed by Stanley Williams.

This complex meditation on good and evil is ultimately about redemption and spirituality. Close attention must be paid because the poetic style of the play can easily lull you into listening to the music of the words to the point of possibly missing the meaning.

I would suggest bringing a cushion to ease the discomfort of sitting on hard folding metal chairs for 110 minutes with no intermission.

Drinks and snacks are sold. Because of language of a violent and sexual nature, no one younger than 17 will be admitted unless accompanied by an adult.

When: 8 p.m. Friday and Saturday through April 28
Where: The Space, 729 Court C (Opera Alley), Tacoma
Tickets: $14.50 available at brownpapertickets.com and at the door
Information: facebook.com/assemblagetheater
Posted by Alec Clayton at 12:48 PM