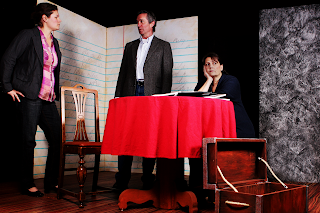 Pictured left to right: Megan Kappler, Brian Tyrrell and Jana Tyrrell
“Fiction” at Capital Playhouse is a wonderful little play by Steven Dietz. It is directed by Peter Kappler and Brian Tyrrell and features a three-person cast consisting of Megan Kappler, Jana Tyrrell and Brian Tyrrell. I call it a little play not because of its length — it runs a little under two hours with one intermission — but because it feels intimate and has a small cast and no set changes.
Linda Waterman (Jana Tyrrell) and her husband, Michael (Brian) are both fiction writers. Michael has become exactly the kind of successful hack writer he disdained in his youth, and Linda is a one-hit wonder who has milked her one successful novel into a career teaching fiction writing. Abby (Kappler) is another writer whose life intersects with theirs at various points over the years. Their stories are told though dialogue and reminiscences that bounce back and forth in time and place, from when Michael and Linda first meet in a little café in Paris to Linda’s college lecture hall to a writer’s retreat and the Watermans’ home much later in their life.
The set by resident designer Bruce Haasl is simple but clever. There is a small table for the Parisian café, a kitchen table for the Waterman home and a desk to represent a writers’ retreat. The walls are the cover and pages of a room-size journal. Scene changes are accomplished by simply moving from one spot on the stage to another.
The story is witty, touching and real — and the cast is terrific.
I was put off briefly by the first scene which I did not care for as it unfolded but which was revealed as a much better scene as later scenes shed light on it. The reason I didn’t like it at first was because I thought the writer (Dietz, not the “writers” in the play) was being facile and trying too hard to be clever. Michael’s quips were pretentious, and Linda’s emotional outbursts when arguing about rock music seemed overblown. But in retrospect it became clear that they were both nervous and trying overly hard to impress one another I realized that both the writing and the acting in this scene were spot-on —right down to Michael’s false cheeriness. I imagine that anyone who has ever had a first date or a chance encounter with someone they’re attracted to could see the rightness of that scene.
Such truthfulness continues throughout the play as Michael and Linda change, as they argue, as they love each other, and as they discover secrets about one another.
There’s a saying in theater that there’s no such thing as a small part. This is certainly true for Kappler’s Abby. She has numerous brief scenes, and each scene she is in is pivotal. She plays a complex character with dignity and emotional control.
Doing non-musical shows at Capital Playhouse is a new experiment (although I was recently informed that in their early years they did non-musicals). The audience the night I attended was about half that of their average musical show. I hope that will change, because the two non-musicals they have done this year, “Brighton Beach Memoirs” and this one, were excellent. I’d love to see this theater be able to successfully continue their Stage II non-musicals.
When: 7:30 p.m. Thursday-Saturday and 2 p.m. Sunday through April 22
Where: Capital Playhouse: 612 Fourth Ave. E., Olympia
More information: 360-943-2744,text
Posted by Alec Clayton at 9:59 AM