Getting Distracted at Olympia Little Theatre 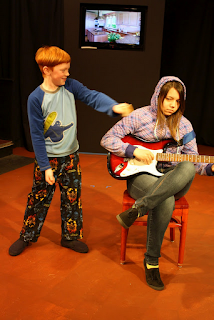 Top: Quinn Hargrove and Kira Valandra
Bottom: Steven Vocke, Elizabeth She and Steve Lien
photos by Toni Holm
James Patrick seems to have found his niche in directing.  His latest, and only his second foray into directing, is Lisa Loomer’s “Distracted” at Olympia Little Theatre. In a program note he wrote that Loomer’s characters are an actor’s dream. Implicit in the idea of any character or characters being an actor’s dream is the notion of challenging roles that only the best of actors can master, and as the bard has said, Ah, there’s the rub.
For this show Patrick has assembled a troupe of actors with limited stage experience, and although they give it their best and are generally on target they don’t quite hit the bull’s eye. Their performances are slightly forced. Throughout, they broadcast that they’re acting. Even Elizabeth Shé, who is the most seasoned performer on stage and is a joy to watch in the lead role as Mama, seems ever so stilted in moments; and it is noticeable that the others are trying very hard. Even as I write this I feel a nagging sense that perhaps I’m being too critical. This is, after all, community theater and slight imperfections are forgivable, and I did very much enjoy this show.
Loomer’s script is wonderfully complex. She manages to convey what it is like for a parent to walk the tightrope between the exasperation of raising a child with what is diagnosed as Attention Deficit Hyperactivity Disorder and the joy of loving a child with special abilities; the frustration of dealing with doctors and teachers and neighbors who do not understand, and the farcical comedy of… well, of what I just described — raising a child with ADHD and having to deal with all of those well-intentioned but stupid people.
In the best of modern plays comedy and drama are so integral as to be unclassifiable, which is definitely true of “Distracted.” The term “dramedy” may sound as forced as bad acting, but it fits. Often the best of modern plays also break the fourth wall in clever and unexpected ways, and “Distracted” does this in spades. It does it often and hilariously, starting when Mama tries to explain to her son that it’s not okay to use the word “fucking.” She is reduced to telling him it’s okay at home but not on stage — indicating that yes, indeed, this is a play, not real life, and there are audience members out there who may be offended by that word.
Mama and Dad (Steven Vocke) constantly turn to the audience to explain what they’re feeling or to plead their case, sometimes to get the audience on their side in their arguments with one another or with their antagonists (the neighbors, doctors and their son’s teacher).
Concomitant with the breaking of the fourth wall is the way the actors move props about to change scenes. Normally I hate it when stage hands come out and move props in view of the audience. I understand that it is sometimes necessary, but it can be terribly distracting. But in this performance the distraction (intentional word choice) becomes part of the show. The family watches TV a lot. There are two monitors on stage which quickly switch from one thing to another — show to show and newscast to newscast including broadcasts from when the play is set during the Bush administration and images that are reflections of what is happening on the stage. Just as quickly the action jumps from their home to schools and doctors’ offices with actors picking up chairs and moving them as they go from one appointment to another. Both the moving of props onstage and the use of TV monitors were the notion of stage manager and set designer Susan Patrick, the director’s wife, who saw it done in a similar way years ago at the Oregon Shakespeare Festival.
Just as they move about as quickly as movie jump-cuts from scene to scene, so do they rush back and forth between frustration and anger to hilarity and to tenderness. Often their son’s ADHD causes rifts in their marriage. They are desperate and they don’t know what to do, but they handle it mostly with good humor, especially Mama, who gets most of the best lines.
The son, Jesse, (played by 10-year-old newcomer Quinn Hargrove whose previous acting has been two performances in Olympia Family Theater summer camp programs) shouts from offstage throughout the play. Unseen until the final scene, he nevertheless is believable as the hyperactive boy.
Shé, and to a lesser degree Vocke, carry the show on their shoulders. Seven other actors play multiple roles as doctors (including one who is also an actor with ADHD), nurses, a teacher, a neighbor girl who cuts, and others.
It is a play that deals with very painful realities in a manner that verges on farce. It easily holds the audience’s undistracted attention.
WHEN: 7:55 p.m. Thursday-Saturday and 1:55 p.m. Sunday through April 29
WHERE: Olympia Little Theatre, 1925 Miller Ave., NE, Olympia
TICKETS: $10-$14, available at Yenney Music Company on Harrison Avenue (360-943-7500) or  http://www.brownpapertickets.com/producer/2313
INFORMATION: 360-786-9484, http://olympialittletheater.org/
Posted by Alec Clayton at 12:41 PM