Contemporary ceramics on the edge 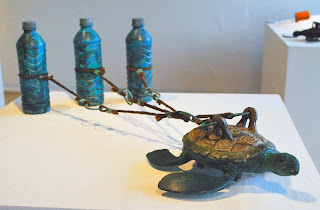 Fulcrum Gallery has joined other area galleries in celebration of the 46th annual NCECA ceramic conference by presenting the show Creatures of Habit: Contemporary Ceramics - On the Edge with ceramic artists Heather Cornelius and Spencer Ebbinga. Each artist explores human and animal consciousness through the creation of anthropomorphized animals (or, in the case of Cornelius, animal-morphed human beings).

The gallery press release says: "Heather uses her smooth visual language to articulate messages of feminine ideals and iconography. Similarly Spencer opens up his subconscious to us by extracting his surrealistic visions from the dream state and giving them physical form." The description of Ebbinga's work seems pretty accurate to me, but I fail to see how Cornelius' figures relate to feminine ideals and iconography.

Her work consists of busts of human figures, some with animal parts - her take on Minotaurs and chimera and the like. They are fired but unglazed ceramic busts of men and women. They're slightly larger than life size. There's a male-and-female couple, nicely done but not particularly interesting, and a bearded man with heavy chest hair and ram's horns on his head and hooves instead of hands. There is a black ram's head on the wall that relates to a real ram's head in the way Warhol's Brillo boxes relate to real Brillo boxes. Sort of, but not so effectively. And finally there is a piece called "Like Mother," which is her only visually exciting piece. It is a nude woman (from waste up, the definition a sculpted bust) with a duck's head. The figure is the natural red-dirt color of clay. The head is white, and the duck has a black bill. What's exciting about this is the contrapposto of the body as it relates to the arms and head. (And if there are purists reading this I know I've been liberal with the definition of contrapposto, but she does in this figure something akin to what Michelangelo did so masterfully with his "David.")

Of the two, and acknowledging the exception of Cornelius's "Like Mother," Ebbinga is by far the better artist. He is showing a series of six small sculptures of turtles carrying heavy burdens. They are metaphors for the human condition, and they are skillfully made and have the patina of ancient metal sculptures. They can easily be seen as brass icons discovered in an archeological dig. Through his turtle metaphors Ebbinga comments on slavery, the myth of Sisyphus and the degradation of our environment.

For example, his "Burden of Need" depicts a turtle dragging bottled water like slaves pulling stones to a pyramid site. The artist said it was inspired by a trip to China, where lack of potable water is severe. "It speaks to how we tax our natural resources and how we seem to treat them without regard to their long-term viability," Ebbinga said.

Another piece called "Spare Parts" expresses similar concerns by way of a clever pun. A slave turtle drags behind him a sled loaded with spare turtle parts. The spare parts are, of course, turtle shells.