'Turn of the Screw' 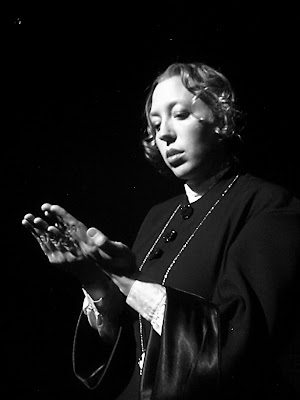 for The Olympian / The News Tribune
Pictured: Christopher Cantrell and Ingrid Pharris, photos by Peter Kappler

Playwright Jeffrey Hatcher has adapted or written many horror and mystery stories for the stage, including "Murder by Poe" and "Dr. Jekyll and Mr. Hyde." He also wrote the play based on the immensely popular "Tuesdays With Morrie."

Now comes another Hatcher adaptation to Olympia’s fringe venue The Midnight Sun. “The Turn of the Screw” – based on the classic ghost story by Henry James and brilliantly adapted by Hatcher – is presented by Prodigal Sun Productions starring Ingrid Pharris and Christopher Cantrell, and directed by Peter Kappler.

While staying true to James’s words in dialogue and monologue, Hatcher has pared the Victorian novella down to bare bones, giving it a stark and psychologically frightening aspect more intense than the overwrought original. And true to the playwright’s intent, Kappler, Pharris and Cantrell present this play with no accoutrements.

The tiny black-box space is bare. The set consists of blocky black stairs against a black wall and a bare black box on the floor that is used as a chair. There are no props, no set, no costume changes. The actors wear black-and-white costumes. Music and lighting is minimal. Even sound effects are comically and eerily minimal. When the clock strikes one, a voice from backstage (probably Cantrell) says, “One,” and when a door creaks, the backstage voice says “Creak.”

There is a lot of subtle comedy within the horror and drama, much of it Victorian-era sexual innuendo delivered deadpan or in wide-eyed shock by Pharris. In one of the more obvious instances, Cantrell says “aversion” and she thinks he’s asking if she’s a virgin. There are also many Freudian-sexual allusions. The governess is sexually attracted to her boss and there are strong hints at improper relations between a former governess and valet and the children in their care, but they are all couched in “safe” Victorian-era language. References are made to being bad and being “free with,” and there are hints at sinister behaviors that are never explained. Much is left to the imagination.

In a nicely worded program note, Kappler says, “Like a ghost story told ‘round the fire, the imagination of the audience is as equally important as the craft of the teller.” He explains the reasoning behind the bare-bones production by quoting Antoine de Saint Exupéry: “Perfection is achieved, not when there is nothing more to add, but when there is nothing left to take away.”

In James’s original story, this tale is told by a guest at a Christmas party. In this version, an unidentified narrator, Cantrell, tells the tale while seated on the black box with Pharris standing behind him almost invisible in her black dress. Pharris plays the governess, the protagonist of the story. Cantrell plays all other characters, including the master of the house who hires the governess and instructs her to handle all problems on her own and never contact him; the two children, Flora and Miles; and the servant, Mrs. Grose.

Cantrell and Pharris are brilliant. He portrays all of these characters without costume or makeup change but with simple and subtle changes in voice, posture and manner. She plays the governess with an emotional intensity that is gut-wrenching and exhausting. At one point in the story, she stands high on the riser while Cantrell playing the 10-year-old Miles stands below her, giving a sense of difference in size and power between adult and child that was impressive.

I saw audience members squirming on the edge of their seats, and as the actors took their final bows, they were sweating and panting, visibly drained but exhilarated. The sold-out house opening night gave them a boisterous standing ovation.

“The Turn of the Screw” runs 90 minutes without an intermission.

The Turn of the Screw

WHEN: 8 p.m. Fridays through Sundays, through Nov. 14; pay what you can this Friday

TICKETS: $12 at the door or at www.buyolympia.com/ events