‘The Nerd’ is for fans of lunacy 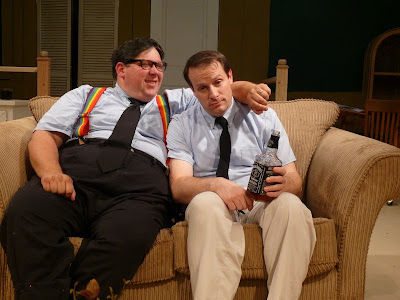 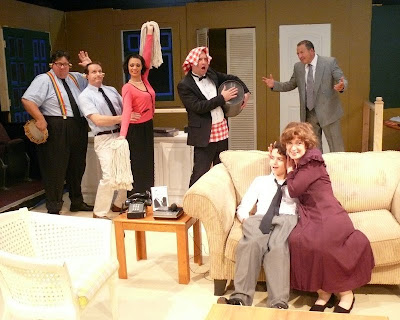 Comedy is tricky businesses. The line between insanely funny and simply insane is very thin. For example, think back to the zanier bits on “I Love Lucy” or “Monty Python’s Flying Circus.” How easily any of those could have come across as simply stupid, and how often Monty Python actually did fall flat. For a more recent example, there is “The Nerd” by Larry Shue as performed at Olympia Little Theatre.

There is a kid in the play (Tristan Vickery as Thor) who is portrayed as an out-of-control brat from hell, but he seemed mature and mild mannered compared to the grown-ups who put sand in their tea, pretend to be pigs, and at one point run around with bags on their heads and things stuck in their ears.

Shue’s entire premise is absurd, and his plot is far-fetched. An unexpected house guest shows up in the home of architect Willum (((CQ))) Cubbert (Terence Artz) just when he is trying desperately to deal with a client whom he does not like but needs to impress, the self-important Warnock Waldgrave (Tim Shute). The house guest is Rick Steadman (Dave Marsh) who saved Willum’s life when they were in the army. Rick is dumb, obnoxious and wreaks havoc in everybody’s life. Willum feels obligated to him and no one knows how to get rid of him. When everything else fails, they try to out-obnoxious him. But Rick just thinks they’re playing games, and he loves it.

Marsh steals the show. Before he shows up well into act one, the comedy seems strained at best. Artz as Willum and Jamie Norman as his lady friend, Tansy, act woodenly. In the beginning neither seems to have very much personality at all. Artz seems tired, which is appropriate to the character, but if he was going to play tired he should have exaggerated it for comic effect rather than half-heartedly mumbling his lines (he get better). Norman rushes her lines and expresses little emotion. Only Matt Garry as their wisecracking friend Axel the drama critic seems to have any spark at all. But then Marsh shows up in an outlandish costume thinking it’s a Halloween party, and hilarity ensues. With a vacant expression, loud monotone voice and that all-too-clichéd nerd symbol the taped-together glasses, Marsh nails the character of a man so dumb that it takes him two months to learn the first two verses of the national anthem, which he performs with the occasional aid of his tambourine.

Shute as Willum’s client Warnock, and Martha Guilfoyle as Warnock’s wife turn in commendable jobs in supporting roles. Shute does anger very well, and Guilfoyle elicits sympathy when she timidly asks for something to break, which immediately becomes a running joke.

For a child actor with no stage experience, Vickery is believably bratty, though the character Thor was superfluous to the plot.

The set by Kathy Gilliam is nice, with a number of thoughtful small touches such as clothes casually slung across a banister and a confusion of notes tacked to a board in Willum’s office. The costumes by Norman and Katy Shockman are fun, especially Rick Steadman’s suspenders, Tansy’s dresses and Axel’s “I Shot J.R.” T-shirt, not to mention some carefully chosen shoes. Plus there are telling details in the props, such as the Nixon/Agnew sticker on Rick’s suitcase.

“The Nerd” starts out slow, becomes hilarious when Marsh enters the set, and then becomes tiresome in the second act as the outrageousness drags on too long. People who love slapstick and who love laughing at rather than with people will love it. I just hope I don’t have to sit through it again.