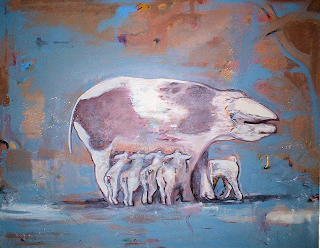 Juried art exhibitions are almost always rife with problems. They usually try to cram in way too much, and the selections are usually inconsistent at best. But not this time. The fourth annual Juried Art Show at South Puget Sound Community College is the best they’ve had yet and may well be the best juried show I’ve seen anywhere in the South Sound since the days of Commencement Art Gallery in Tacoma. (Disclaimer: Nostalgia may be clouding my memory of Commencement. After all, I took home the big money prize in one of their shows, for which I am eternally grateful.)

Steven Suski was chosen for the jurors’ award, meaning he’ll be given a one-man show next year. His "Underwater Diptych" consists of a pair of paintings of diving swimmers, one in each of the two panels. Entering these two works as a single diptych was probably a mistake, because they work best as individual paintings, but that’s my only quibble with them. The placement of the figures is strong. They are thin and sensuous figures of women in subtly patterned bathing suits, and they are delineated by smooth contour lines, and the fluid paint application in muted tones of gray and blue creates an exciting tension between figure and background. Sweet little paintings.

Suski is also showing a large acrylic painting called "Big Pig," which is an iconic image of a mama pig suckling her piglets with some fairly heavy impasto and, as in the diptych, a good flow between figure and ground. The rough surface handling gives it the appearance of an ancient fresco that is scarred and worn.

On a personal note, I’ve seen Suski’s art develop over a 20-year period with lots of fits and starts, and I think his paintings in this show represent his best work ever.

As much as I like Suski’s paintings, however, if I had been the juror I would have picked Julia Haak for the juror’s award. Haak has two sculptural pieces made of scavenged and painted wood. "Awning 3" apparently takes its title from a rolled-up metal awning, which it looks something like. It’s a long, horizontal slab that juts out from the wall in connected triangular shapes with geometric patterns created from painted strips of old wood. The colors are dull chartreuse and pink with accents in red and blue, creating patterns within patterns on a minimalist form. Her other piece, "Two Trough Jukebox," is even more minimalist. Also made from strips of cast-off wood, it is a freestanding fin-like shape painted white.

I featured Karen La Grave’s "Campfire" in my review of the Environmental Art Show at Tacoma Community College. Here she has another painting from the same series. Enigmatically, two legs (wearing differently colored pants) protrude from a blazing campfire. If I’m interpreting it correctly, this painting depicts two people being burned in a raging campfire. The paint is thicker than in her work at TCC, and it doesn’t have quite the same energy, but it is still an exciting if somewhat disturbing image.

Finally, I’d like to call attention to a tiny little fabric collage by Maitri Sojourner called "They Get the Chickens Out of the Back Seat." This little jewel could easily be overlooked, but it’s worth searching out. It’s to your right just as you enter the gallery. I love the semi-abstract form of a Volkswagen as seen from directly overhead, with people unloading things (presumably chickens). And I love the shimmering fabric.

Special kudos to the jurors: June Kerseg-Hinson, Shaw Osha and Scott Schuldt. They did an excellent job.

This show is up only through this weekend. Don’t miss it.