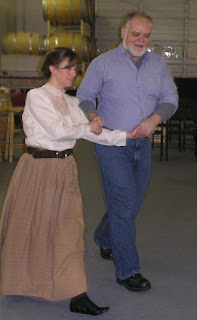 There is nothing like a play by Breeders Theater at the E.B. Foote Winery in Burien. For starters, everything Breeders Theater does is original. The theater company was started by playwright T.M. Sell, a teacher at Highline Community College in Des Moines, and every play they produce is written by Sell.

The other thing that makes BT productions unique is their performances take place in a working winery in the basement of a shopping mall in Burien. It’s cold down there. Patrons are advised to dress warmly, and they are warmed up inside with wine tastings (two before the show starts, two during intermission and two more after the play). Plus, their hearts are warmed by the entertainment. If you have been there once you know to bring a pillow to sit on – the metal folding chairs are uncomfortable without one.

I’ve seen only one other BT production, a hilarious political spoof called “Crazy Naked,” but I understand that most of Sell’s scripts are outlandish comedies, often involving talking animals and aliens and other oddities. “Prairie Heart” is a departure from his usual fare. Set in a farming community in North Dakota in the 1890s, it is a tender love story based on tales told by the writer’s grandmother and her siblings who lived near Minot, N.D.

Ingrid (Adrienne Grieco) finds herself stranded at a desolate train station in North Dakota. She had expected to be met by the family that had hired her to work for them, but they had died. The only person at the station is a large and very dirty farmer named Olaf Olson (Luke Amundson), who is polite but terse when she tries to question him. Via a conversation that is strained and embarrassing for both of them, it is established that she is broke and stranded and doesn’t know anyone there.
Olaf offers to take her home with him. She says, “I’m not that kind of girl.”

Offended and bumbling, he replies, “You’re not pretty enough to be that kind of girl.”

Eventually, she agrees to stay with him to work for him on the farm. Gradually they fall in love, but neither of them knows how to express their feelings for one another. He is painfully shy and overly protective of her honor; she mistakes his shyness for aloofness – all of which results in a comedy of misunderstandings.

“Prairie Heart ” is a sweet play. Naturally sweet, not gooey and mushy. It combines many of the best elements of modern romantic comedies with the sincerity of period romances such as the great “My Antonia” by Willa Cather. Sell’s story is simple, the dialogue sparkling and the characters genuine.

Amundson looks the part of a Norwegian farmer who is described as large and dirty. He’s a physical fit for the part, plus he’s paired with a petite woman who makes him look larger than he is. His faltering speech and constantly astonished looks beautifully convey the impression of a lovestruck young man who doesn’t know how to do much of anything beyond tending to his goat and his horse.

Grieco is one of the most natural actors I’ve seen in quite some time. It does not seem that she’s acting at all – it simply seems that she is Ingrid. The only other time I’ve seen her on stage was as Maria in “The Sound of Music” at Lakewood Playhouse. She was utterly charming in that role, as she is here.

The rest of the cast – J. Howard Boyd, Melissa Grinley, Eric Hartley, Melissa Malloy and Steve Scheide – are all excellent. Boyd – as the narrator who slips into other roles from time to time – seems to truly care about Olaf and Ingrid and shows versatility when playing first a henpecked storekeeper and then a priest. Hartley – as the well-to-do farmer Anders Anderson – displays passion barely held in check as he and his wife, Evy (Grinley) try to gently steer Olaf and Ingrid toward one another and a better life.

All of the cast members, most noticeably Amundson, handle the Norwegian accents without faltering.

Sets and lighting are basically nonexistent, the only props are two stools and a blanket, and the costumes are simple peasant clothes by Melissa Sell. The music is provided by Nancy Warren.