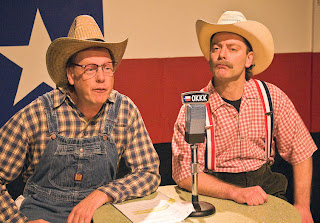 For those who haven’t seen it or don’t know about it, “Greater Tuna” is a theatrical off-the-cuff comedy skit that’s grown to humongous proportions. Written by Jaston Williams, Joe Sears and Ed Howard, it started in Austin, Texas, more than 20 years ago as a party skit based on a political cartoon and soon spread across the country as a favorite play at colleges and community centers and off-Broadway.

Since its inauspicious birth there have been numerous spinoffs, a successful Broadway run, an HBO special and even a command performance at the White House. Promotional material declares that by 1985 it had become the most produced play in the United States. Whether that success has been eclipsed since then, I don’t know, but I do know that all three of the plays in the “Tuna Trilogy” remain popular around the world.

And now the original “Greater Tuna” comes to Lakewood Playhouse.

I saw it in rehearsal and thoroughly enjoyed it. Even the inevitable rehearsal gaffs were funny, and I kind of hope they don’t completely work out all the kinks, because Marcus Walker and Scott Campbell’s improvisational quips in rehearsal were as funny as any of the written lines.

When Williams and Sears first presented “Greater Tuna” as a party skit in 1981, the two of them played all of the 20 characters in the play. Through all its incarnations, that has never changed. It is still a two-actor play with a blizzard of quick costume changes.

The play is mostly a string of loosely connected character sketches with just enough of a plot to establish the various relationships within the human menagerie that comprises the population of Tuna, Texas, population about 900. Billed as the town where “the Lions Club is too liberal and Patsy Cline never dies,” Tuna is one of those little towns where everyone knows everyone else’s business, primarily because everybody’s dirty laundry is aired by Arles Struvie and Thurston Wheelis on radio station OKKK – an intentional reference to the Klan.

Following is a sampling of just a few of the shenanigans going on in Tuna that Wheelis and Struvie are more than happy to report on: The Smut Snatchers are on a campaign to delete objectionable words from the dictionary (and what a list of objectionable words; it’s like George Carlin’s famous list of seven words you can’t say on television only the objectionable words are innocuous words such as “hot”). Bertha Bumiller, president of “Fewer Blacks in Literature,” has her hands full with a crazy son just out of reform school, another son who’s addicted to adopting dogs and a daughter who’s been trying to become a high school cheerleader for seven years. Aunt Pearl has a habit of poisoning dogs. And a judge is found dead while wearing woman’s clothing, specifically a Dale Evans bathing suit.

“Greater Tuna” is lowbrow comedy in the tradition of “Hee Haw” and the “Blue Collar Comedy Tour.” Walker and Campbell are great. Campbell masters a wide range of voices, and Walker displays talents I never would have suspected, such as fiddle playing – not to mention that he barks quite irritatingly.

Based on my experience watching an early rehearsal, I can’t imagine how they’ll ever master some of the required quick changes, but if they end up coming on stage half in costume with wigs aslant, that will simple add to the hilarity. Director Elliot Weiner warns that there is no fourth wall in this play. For people not familiar with theater jargon, that means the actors are just as likely as not to step out of character, and unless you have the script memorized you’ll never know what’s in the script and what’s improvised.