‘Sins of the Mother’ marvelous, intense 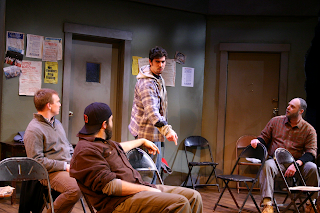 
Harlequin Productions in Olympia has scored a coup that I believe is unheard of for a small town community theater. They are producing the West Coast premiere of a new play by the renowned playwright Israel Horovitz, “Sins of the Mother.”

“Our production is actually the world premiere of the two-act play,” said Harlequin artistic director Scot Whitney in an e-mail. He explained that Horovitz first wrote it as a one-act and later expanded it into the current play, but since it was previously performed as a one-act with the same title Harlequin can’t advertise it as a world premiere.

While Horovitz was in Olympia last year to visit his daughter who lives here, he saw “Shining City” at Harlequin. Impressed with what he saw, he asked Whitney if he would consider directing his new play, which is set to open next year in New York with Ethan Hawke.

This is the big time for little Olympia.

“Sins of the Mother” opened Jan. 22 to a sparse crowd in Olympia’s State Theater. It is the most intense, realistic and gritty play I have seen since I started writing this column five years ago.

Set in an almost abandoned union hall and in the living room of an out-of-work “lumper” in Gloucester, Mass., in the 1980s, the play delves into the loves and hates of five men who grew up together and whose families have been connected for generations in a town where everyone knows everyone, and most personal secrets are not secret at all.

All but one of the men are “lumpers” – their word for stevedores. Bobbie (Scott C. Brown), the oldest of the men, is caring for his wife who is dying from a sexually transmitted disease. He is a Vietnam vet who killed many North Vietnamese. He can’t let it go, and letting go turns out to be a central theme of the play. Dubbah (David Nail) is out of work like them all and caring for a mother in the late stages of cancer who doesn’t even recognize him any more.

Douggie (Zachariah Robinson) is the gentle kid who left town years ago and has just returned. Frankie (Brian Claudio Smith) is an explosive, wisecracking young man who insists on bringing old hatreds and suspicions to a boil. And finally there’s Philly (Claudio Smith in an amazing dual role), the twin brother who escaped to a better life and whose arrogantly suave exterior hides a wounded child inside.

Anything I might say about the plot would spoil it; suffice it to say that it is well-crafted and full of surprises and that the dialogue runs the gamut from gut-wrenching to raucously funny. The quirky speech patterns and repetition of pet phrases, the strong sense of place and of history and the uncompromising realism put this play in league with the works of such great modern playwrights as Arthur Miller and August Wilson.

All four actors are outstanding. Claudio Smith shows great range of emotion in portraying two extremely different characters, one crude and boisterous and the other a study in coolly controlled rage.

Brown inhabits the character of Bobbie in such a natural and believable way as to be convincing that even a man capable of the worst of crimes can elicit sympathy. He’s a big man. I’ve seen him in other roles, and I swear he looks like he put on 40 pounds and 5 inches in height for this role; and it’s all in the way he carries himself.

Robinson is a natural as the quiet, innocent and conflicted Douggie. Nail, as Dubbah, is the moral compass of the play. His facial contortions show his fear and scream out in pain like a Rodney King character pleading “Can’t we all just get along?” with nobody listening.

Scenic and lighting designer Jill Carter, and costume designers Lucy Gentry and Asa Brown Thornton set the tone for a play grounded in place and time, and Whitney’s spot-on direction permeates throughout.

If you can afford only one play in a year, make it this one – unless you are easily offended by coarse language, racial epithets and staged violence.