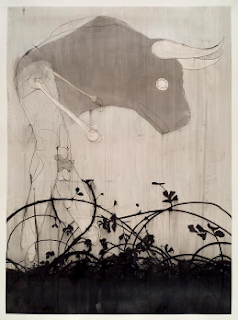 The Black Front Gallery’s latest find is Portland artist Troy Briggs. He offers a group of six large ink and acrylic drawings of strange humoresque figures that relate to certain mythological creatures such as the Greek Minotaur and the Egyptian god Thoth, but their implied stories spring from Briggs’ fertile and perhaps warped imagination.

The drawings do convey sadness. And there is an unsettling harshness about them. Visually, they are adroit with a wonderful balance between soft areas of ink wash and lyrical lines.

The six drawings are all called “Losing My Memory” and are numbered Part IV, scenes 2 through 7. Seen as a group, they present a myth or memory told in mise en scène fashion. The impression on this viewer is that I could surely grasp the whole story if only I could see Parts I through III.

In scene 2, the Minotaur is a little man seated on a straight-back chair in front of a large wall filled with a curlicue, briarlike wall pattern. His bull head almost vanishes into the pattern, which becomes a kind of labyrinth (note that in the myth of Theseus and the Minotaur the beast hides in a labyrinth). In its stark simplicity, its elegant linear patterns and the delicate way figure and ground are interwoven, this is probably the most powerful drawing in the series.

In scene 3, the Minotaur-like creature stands strong and proud. His bull head is gigantic and his human body muscular; the muscles and flesh of his arms are stripped down to bone. The head is a soft, gray ink wash, the body a delicate and lyrical flow of line, and at the base is an inky black tangle of briars. This drawing reeks of muscular power.

In scene 4, a naked woman with a bird head emerges from a perfectly round egg that rises from a dark briar patch. The tonal variations in this are marvelous. With her skeletal and muscle structure clearly visible in the lines of her body, the woman seems a perfect mate for the Minotaur.

In scene 5, the man and the woman stand together looking off to the side. They seem sad and unconnected despite their closeness.

The drawings numbered scene 6 and 7 seem to break from the story or to redirect the story, and they are slightly different in style — smaller and not as rectangular in format. And there are no animal-headed figures. Scene 6 presents a seated woman — no longer the hybrid bird woman but simply a woman, muscular like the bird woman and with full breasts. Scene 7 is a total departure. It is an interior scene with a wall and a dresser and a crow sitting in a window. This is the weakest drawing in the show. The flat, rectangular forms have none of the rhythmic dynamism of the more organic shapes in the other drawings. The silhouetted crow in the window seems trite compared to the figures in the other drawings, and the only thing I like about it is a jagged area of dark gray that reminds me of a Clyfford Still painting.

One weak drawing in a suite of six strong ones ain’t so bad.

This is an excellent show. I just wish a larger gallery would invite Briggs to show a much larger body of work.