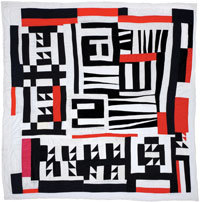 “Gee’s Bend: The Architecture of the Quilt” at Tacoma Art Museum is the second major traveling exhibition of these phenomenal quilt makers.

The show includes 51 quilts — all made by women who are friends and neighbors in the same little town in Alabama, and who are all descendants from the same slave woman.

Written records are scare to non-existent, but evidence supports the oral tradition tracing them all back to a woman named Dinah Miller. Miller was transported from Africa on the slave ship Clotilde, which unloaded its human cargo in Mobile Bay in 1859. A year later, Dinah was sold for 10 cents to Mark H. Pettway, a plantation owner from Gee’s Bend.

Today, the Millers and Bendolphs and Bennetts and Pettways of Gee’s Bend (the latter being descendents from slaves who were given their master’s name) continue the quilt making tradition begun by Dinah Miller. None are formally trained. They learned their craft and their art from their parents and their parents’ parents. The forms and colors of their quilts are passed down from African and Southern folk traditions and are inspired by the houses and barns and road signs of their rural homeland. (The exhibition catalog contains amazing pictures of quilts juxtaposed with pictures of structures in the area.)

For generations these quilters were unknown outside of their native environs, but they were introduced to the wider world first through a quilting cooperative in the 1960s and later via an exhibition at the Museum of Fine Arts, Houston, in 2002.

At first, mainstream art critics scoffed at the show. Even as recently as 2002, quilts were not considered worthy of fine art consideration. They were dismissed as mere folk artists. But very quickly some of the most respected critics in American began to sing a different tune, and the rest followed suit.

Peter Plagens said the quilts were “the equals of any abstract paintings by any trained artist living in one of the world’s greatest cities.”

And Michael Kimmelman, chief art critic for “The New York Times” said their works are “some of the most miraculous works of modern art America has produced.”

The quilts are often ragged in form with sloppy stitching and are made from found or hand-me-down materials such as old gingham, corduroy and denim — what they call “old raggedy cloth.” Most are bold and simple variations on a few traditional patterns such as “bars and string” (ladder-like bands of bold colors), “housetops” (concentric squares), “blocks and stripes” (just what the name implies) and “Bricklayer” (stacked rectangles and bars in a typically pyramidal shape).

As with most great art, it is almost impossible to pin-point what sets these quilts apart from others. Many other quilters may employ similar patterns, but there is something special about every Gee’s Bend quilt that may not be definable but is certainly recognizable. It might be an unexpected change in a repetitive form or an unusual color combination, or maybe a single patch of red far off in a corner in a green and brown quilt, or the way a pattern suddenly reverses itself and positive becomes negative. These are things that can be taught in theory, but things that perhaps only a born artist can do successfully. These women seem to have been born with an unerring sense of color and form. Peter Plagens wrote, “It’s as if something in the local water has produced a whole villageful of Paul Klees.”

The Gee’s Bend quilts relate to abstract painting more than to other quilts. They are more akin to paintings by Paul Klee and Clyfford Still and Ellsworth Kelly and Al Held and Stuart Davis (but without the subject matter).

The show runs through Dec. 9 at the Tacoma Art Museum.

Special events held in connection with the exhibition include a panel discussion with four of the quilters from Gee’s Bend: Mary Lee Bendolph, Louisiana Bendolph, Loretta Bennett, and Nettie Young, Sept. 30, 2 p.m.
Posted by Alec Clayton at 9:30 AM