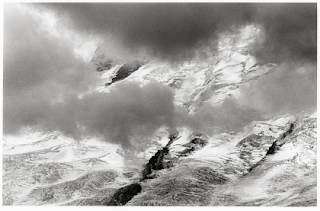 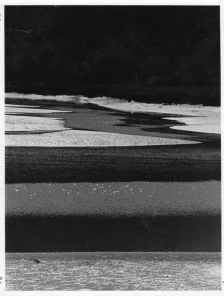 "Veiled Northwest: Photographs by Mary Randlett" is the latest show to open at Tacoma Art Museum. And it's about time. Randlett is mostly famous for her portraits of Pacific Northwest artists such as Morris Graves, Kenneth Callahan and Guy Anderson, but her softly lit and mysterious landscapes are also greatly respected and have not been presented in a dedicated museum exhibition in more than 40 years.

Few painters or photographers have ever captured the essence of Northwest light so beautifully. Randlett speaks of it as "veiled" or "liquid" light. In "Alchemy," a poem inspired by a Randlett photograph, Denise Levertov coined the term "fogmuffled radiance" to describe the light. Needless to say, the unique silvery light of the Pacific Northwest and Randlett's way of capturing it in black and white photographs have inspired many a poet and writer.

While I'm quoting, I may as well mention one other well-known quote that comes to mind. Paul Cezanne said of fellow painter Claude Monet, "He is only an eye, but my god what an eye."

That statement could easily be applied to Randlett.

Randlett was born in 1924 and has been photographing the people and places of the Northwest for more than 55 years. She first became nationally known in 1949 for her photographs of the hydroplane Slo-Mo-Shun IV, which was the fastest boat in the world at the time. Her pictures have been published in hundreds of books, magazines and newspapers.

Over the years, she has known many of the best writers and artists in the region, and she says she has learned from all of them. "Everybody has opened up the world to me."
The show at TAM coincides with and celebrates the publication of a big, coffee table book — "Mary Randlett Landscapes" — to be published in mid-October by the University of Washington Press. The book features Randlett's landscape photography and essays by Ted D'Arms, Barry Herem, Denise Levertov, Jo Ann Ridely, and Joyce Thompson and seven poems by Levertov, some of which are printed as wall text in the exhibition.

Randlett travels extensively throughout the area taking pictures of rivers, lakes and mountains —nearly always in inclement weather, the stormier the better. She likes to catch trees and rocks and water just as they peek out from behind a veil of cloud or fog, to halt the sun as it winks from behind a cloud or over the crest of a hill, or in broken beams from behind trees. She never crops her photographs, and the only darkroom manipulation she admits to is a little dodging to enhance the back-lit effect she so loves.

She produces a range of gray tones from velvety black to blinding white. In most of her photographs, changes in value are softly muted and kept to a very narrow middle range, but in a few there are stark contrasts. A photograph of Deception Pass pictures a single tree next to a large rock with other trees in the background. Everything is a soft, misty gray fading to white. The only dark spots are in the water in the bottom left-hand corner of the picture. Here, the swiftly churning water looks almost like mercury.

"Above Paradise, Mount Rainer" has a greater range of tone and more contrast with soft gray clouds that look like smoke looming over the sheer glowing white and velvety black of the mountain. Another extreme can be seen in "Tideline," a picture of water, sand and rock with stark contrasts between clearly demarcated bands of black, white and gray. This picture is almost totally abstract. It is almost impossible to tell what is water, what is land and what is horizon. It looks like a solarized photograph, but it's not.

Like "Tideline," an early photograph called "Ocean Beach" is almost totally abstract, depicting concentric circles made by waves. Shown alongside this is a small photograph of an abstract painting by Leo Kenney that makes you wonder who influenced whom. Or were they both simply inspired by similar visions? According to Randlett, influences between her and other artists she has known go both ways — and they are all inspired by the awesome beauty of the Pacific Northwest.

well written, interesting, and beautiful blog.
I thought about including a link to your site on my blog.

if you ever get the chance, come visit me back

my blog is www.BrawnyHunk.com (not nearly as superficial as it sounds ;-) )