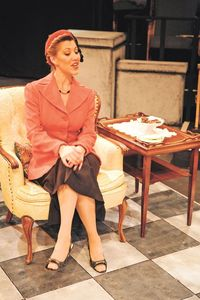 review of The Hollow at Lakewood Playhouse

Agatha Christie’s “The Hollow,” now playing at Lakewood Playhouse, is one of the famous mystery writer’s later and more mature works. The humor is drier, the characters less eccentric and more fully rounded and the story line more sophisticated than your run-of-the-mill Christie or Christie-knockoff murder mystery.

Christie’s novel, written in 1946, was a Hercule Poirot mystery, but when she adapted it for the stage four years later she put Scotland Yard’s Inspector Colquhoun in the role. As the Lakewood Playhouse performance shows, that was a wise move. Poirot was a larger-than-life character but Colquhoun, as played here by Mike Slease, is a straight-shooter without noticeable quirks or affectations. This change takes the emphasis off the whodunit plot and puts it more squarely on the complex relationships between the various Angkatell family members, their houseguests and servants, making it less plot-centered and more character-centered.

That is not to say, however, that “The Hollow” strays very far from the typical Christie formula. Like nearly everything in the genre, it takes place in an English country home where various guests gather for a weekend. There is the inevitable butler and maid and the usual cast of upper-crust eccentrics. And, of course someone is murdered and everyone is suspect.

Henrietta, a self-possessed and strong-willed sculptress (Marie Kelly) has been living with them since her studio burned down. Other Angkatell family members who show up for the weekend include the somewhat pitiful Edward Angkatell (Michael J. Griswold), who has an extremely low opinion of himself, and a cousin named Midge Harvey (Emilie Rommel), who is something of a misfit in the family because she actually works for a living and has no outstanding eccentricities.

Throughout a slowly developing first act, the complex relationships between these people are revealed. Gerda, who seems not to have a thought in her head, is weak and shy and, apparently, has no life of her own but exists to serve her husband and take care of their children (who are left at home with a nanny and do not appear in the play). Over the years, Dr. John Cristow has molded Gerda into the subservient creature she now is, and he hates that she has become exactly what he wanted her to be – a living epitome of the old saw that you’d better watch what you ask for.

To further complicate Gerda and John’s relationship, he is having an affair with Henrietta – one of many women he has had short-lived affairs with going back to the actress Veronica Craye (Annie Coleman), a sexy, scheming woman he was in love with 10 years earlier who has recently bought a house near The Hollow. Veronica comes back into John’s life on this fateful weekend.

Further stirring up the intrigue, Edward is in love with Henrietta and Midge is in love with Edward; and Lucy is so absent-minded and irrational that Sir Henry has to act as her protector and sometime interpreter.

When the inevitable murder occurs, more than a few people in The Hollow have motivation, but only one is in the wrong place at the wrong time with a murder weapon in hand. But then what has Lucy hidden in her egg basket, and why is the butler (Michael Dresdner) acting so strangely?

The play is well directed by John Munn. The timing of the many entrances and exits keeps the action moving while building suspense, and the entire cast does a good job. Puett, Griswold and Kelly are outstanding. So is Dresdner as the oh-so-proper English butler.