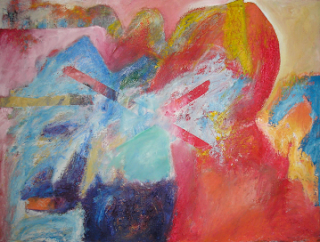 I've been painting like mad lately in an attempt to finish some new paintings for my upcoming show. This latest one is called "X-plosion" and it is so new I'm afraid it won't be dry enough to hang in my show. But then, on the other hand, I've been known to hang paintings that were still wet.

Anyway, I've been painting like mad because I don't want to show the same paintings I had in my last two shows and I haven't done many new ones lately. Ive completed seven new paintings since June of last year, and at least one of them I might leave out of the show because I have doubts about it. I probably won't know until the last minute, but at least six of the seven newest paintings will be included, and I can assure you that unless you've been in my studio lately there will be a few more you've never seen -- including one of my all-time favorites that I traded with Ron Hinson years ago and has never been shown anywhere.