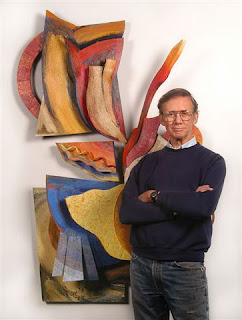 My dear friend Ron Hinson has a show opening Feb. 17 at Art on Center Gallery. In my opinion, Ron is one of today’s best contemporary painters. Is my judgment clouded because Ron is my friend? I don’t think so. We became friends because we admired each other’s work.

Ron has been honing in on the same somewhat narrow artistic vision since about the time we first met some 16 years ago. Since then he has continued to work on three unrelated bodies of work: abstract painted constructions, a series of illustrations of classic tales in acrylic, and charcoal drawings of subjects taken from ancient mythologies. In all of these works, he constantly challenges himself by breaking free from his compositional comfort zone while never losing sight of the basic aesthetic truths that have guided him throughout his career.

I do not normally write preview articles but I wanted to get this out early. The show opens with a Saturday evening reception from 5 to 8 p.m. Feb. 17 and runs through March 24.

Mr. Hinson is a painter who lives in Olympia. His works are three dimensional but yet he does not call them sculpture. They are indeed very painterly and textural. He is a master at what he does. He has a following of fans and collectors. His Studio is in downtown Olympia in the same building as K Records. One can hear the garage-rock bands rehearsing up stairs. It is a very cool atmosphere. Mr. Hinson is like a lot of artists in the sense that he seems ageless. He has been working in his studio for this show since his last show in Nov. 05.He will be presenting a whole new batch of work for this show at Art On Center. Most of Hinson’s work needs to be assembled. The three dimensional work is constructed out of wood and have instructions for hanging. Some people call them painted constructions, to others they are paintings that have shapes that pop out from the wall. No matter what art terminology is put on them, they are interesting and beautiful.

Background
Ron Hinson is from the mid-western United States, Ohio and Illinois. After graduating from college with an MFA in 1958, he went to NYC were the American Art scene was finally getting the attention it commanded. It was the time between Abstract expressionism and Pop art, between Pollack and Johns. One might observe that Mr. Hinson’s work is seeded by these American movements. After three years as and art director for J. Walter Thompson Co. in Manhattan, Ron moved on to the academic world to become a college art instructor. This is the world where he gained respect from so many students. The path of teaching started at Union College in Barbourville KY and ended at The Evergreen State College in Olympia, from 1961 to 2000, 39 years! Ron is still asked to give a lecture here and there. He is known also for his keen observation skills. When Ron is in the room at an art gallery he seems to block everything out around him to look at the art. He doesn’t seem to get distracted in the process of viewing other artists’ work.

Hinson has an impressive number of works in public permanent collections. His work has been placed in 13 schools by the Washington State Arts Commission. His art work is also in permanent collections in a few major NW corporations. In 1987 he was awarded a grant for his work, by the Adolph and Esther Gottlieb Support Grant.

Art on Center is located at 1604 Center St., Tacoma, Washington. They are open Wed.-Sat. noon to 5 p.m. (or call for appointment to request viewing off hours)