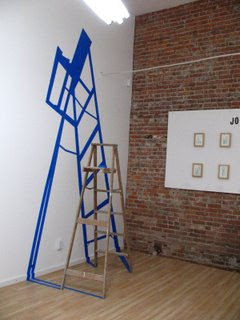 You probably noticed the quotation marks. That’s because there are no actual names for the things Penrod does -- at least not names that are commonly accepted. He documents spatial relationships between objects and time of day by “tracing” or “coloring in” the shapes of cast shadows with common painter’s blue masking tape. The objects whose shadows he traces are common objects such as bottles, ladders, fire hydrants and stop signs found in public spaces; and his art is left in the places in which they are created. Understandably, they may not always last very long. But he documents at least some of them with photographs.

In addition to these found objects and their shadows, there are small photographs of many of his installations in other places and a group of eight gouache paintings of shadows cast by electrical wires. Some of the actual objects are intriguing to look at, while others look somewhat tawdry. Overall, I believe the photographs look better than the actual objects for the simple reason that the edges where pieces of tape overlap do not show in the photographs. The shadows look more solid, and color modulation along their edges create a halo effect where cast shadows ant tape-painted shadows overlap. (This overlapping effect is especially important because the actual shadows change with lighting conditions, but the taped shadows never change.)

A small paper cup sitting in the window seems almost as if left there by accident with its nice blue shadow crawling up the wall.
Near the back of the gallery is a ladder with a shadow almost twice as tall at the ladder itself. This combination creates an intriguing play of line between the real and the imagined. Across from it, a man’s shadow overlaps the edges of a strange little doorway in the wall -- a door that is no taller than five-foot-four.
The least effective piece is a flower pot sitting on the floor with a heavy blue tape shadow. More than any of the other pieces, the overlapping pieces of tape are clumsy and heavy looking.

On the back wall is a group of eight small gouache paintings that look like purely abstract forms in a semi-transparent blue on white paper. The forms are sensuous and well designed. But they are not abstract; they are traced shadows from electrical wires.

Overall, this is a very nice show based a unique visual concept.
The show runs through February. The gallery at 106 4th Ave. in Olympia has expanded its hours of operation. It is now open 11 a.m. to 7 p.m., Wednesday and Thursday, 11 to 6 on Friday, Saturday and Sunday.
Posted by Alec Clayton at 2:37 PM