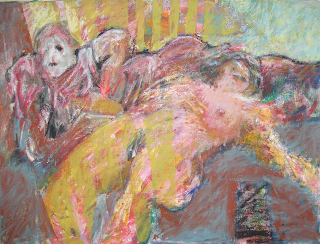 My paintings will be the subject of a film viewing and discussion at Susan Christian’s studio space Salon Refu. There will be three short films with discussion after. Also some of the paintings featured in the films will be on view. All of the films were made by my wife, Gabi Clayton.

Portrait of Noel (4:48) is a stop-action film of me in the process of painting a portrait of our son, Noel, using stop-action animation to make the painting create itself to the rhythm of “Take Five” by the Dave Brubeck Quartet. 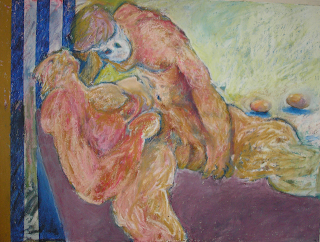 In Open Studio (9:37) a group of young adults, mostly TESC students, gathered in our apartment to discuss my paintings with me. The paintings were displayed on the walls. These were not art students; they were mostly film students, and rather than talking about the paintings from an artist’s point of view they talked about them in sociological terms or in terms of how they personally affected them. The paintings I was doing at the time — from approximately 1985 to 1990 — were all figurative. Many of the ones in this film were about sex. I don’t mean erotic or titillating art (although you never know what might turn folks on); I mean art that comments on, makes fun of or otherwise investigates our attitudes about sex and nudity. A lot of them were also intentionally humorous and/or bizarrely surrealistic. 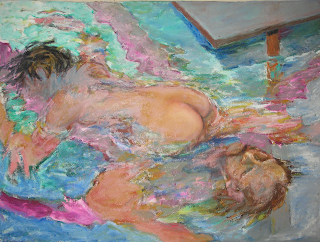 Two Women (1:28) is another stop-action animation, this one of a single painting of two women sitting side-by-side.

During time period when these were made I was teaching in the Art Department the University of Southern Mississippi and Gabi, was a film student first at USM and later at The Evergreen State College. She filmed Open Studio as a class project at TESC. At that time I was transitioning from figurative to abstract painting.

Hi
I read your post and it contains very useful information. Thanks for this useful article.